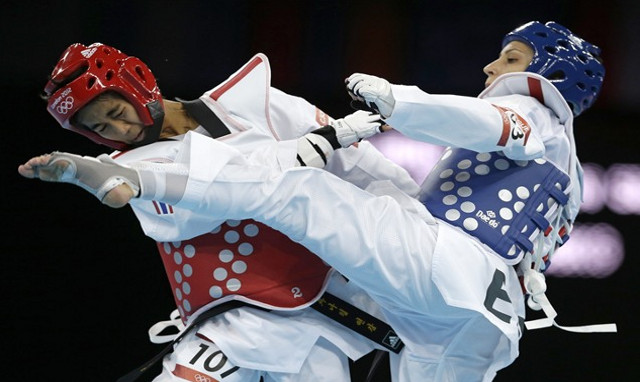 The Korean martial art had been the first sport expected to be dropped from the Olympics due to repetitive and boring jumping at the same spot, controversial judging, and the dominance of Korea. Taekwondo had been considered the most boring among five Olympic martial arts including boxing, fencing, judo and wrestling. The International Olympic Committee will replace one of the five events with one of eight awaiting entry in September next year. Among them are Chinese wushu and Japanese karate.

Against this backdrop, taekwondo renewed its image in London. The competition arena shrank from 10 by 10 meters to 8 by 8 meters, and a warning is issued in the absence of no attack in 10 seconds to prevent a defensive-oriented contest. The new scoring system awards one point for a kick to the torso, three for a kick to the head, and four for a turning kick to the head. The adoption of electronic protection gear was made to reduce judging errors. If a player disputes a call, the video replay is shown by six cameras on a large screen. As a result, taekwondo was free from controversy in the London Olympics.

All of the rule changes seemed disadvantageous to Korean athletes, however. More points for a kick to the head and a turning kick benefit Western competitors. A match that requires constant attack is tough for Korean athletes, who are physically inferior to Western counterparts. An electronic body protector is also advantageous to Western athletes because it requires strikes of a certain strength. Nevertheless, the global taekwondo community accepted the changes. This was taekwondo`s last painstaking step to stay in as an Olympic sport.

The efforts paid off. The 6,000-seat taekwondo arena in London was filled with spectators even in qualifiers, quite a contrast to the less dynamic judo, in which players tinkered with their uniforms instead of showing fancy techniques. IOC President Jacques Rogge, who personally saw the taekwondo competition, said, “It was very systematic and interesting.” The unpredictable development of matches produced eight gold medal winners from different countries, and 21 taekwondo competitors from 21 countries won a medal. Taekwondo was spread this much to the world thanks to the new rules. Korea had its worst showing in Olympic taekwondo with one gold and one silver, but overall, the athletes and the global family of taekwondo seemed happy.