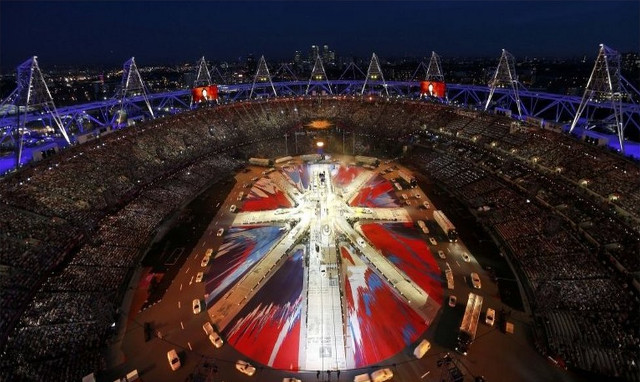 “We lit the flame, and we lit up the world,” London organizing committee chairman Sebastian Coe said.

London didn’t just have a closing ceremony at the end of 17 thrilling days of competition. It had an after party, as organizers dubbed it. Sunday’s show began with a beautiful aqua set, representing an early-morning rush hour in London. Soon the night was off and running, and a street party erupted with sing-a-long classics by Madness (Our House), the Pet Shop Boys (West End Girls) and One Direction (What Makes You Beautiful).

The production titled A Symphony of British Music began with footage of John Lennon singing Imagine. The stadium sang along to the chorus, “And the world will live as one.”

The Spice Girls reunited to perform Spice Up Your Life while standing on the cab roofs that spun around the very track where Bolt and others once blazed. Monty Python’s Eric Idle led a mass rendition of Always Look on the Bright Side of Life.

As International Olympic Committee president Jacques Rogge put it, “These were happy and glorious Games.”

No wonder no one in Olympic Stadium wanted them to end. When Rogge officially declared the Games of the 30th Olympiad closed, fans let a out a plaintive, “Ohhhhh.” When the flame flickered in the cauldron, its stems opened outward and a new flame rose above it. The outline formed a phoenix. 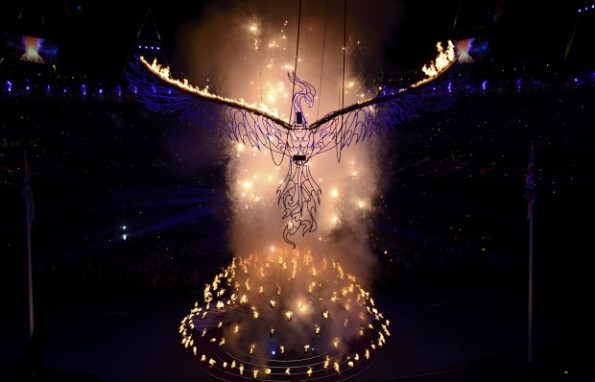 With the flame extinguished and the handover to the next host, Rio de Janeiro in 2016, was official, The Who came on the stage to lift everyone’s spirits. “Don’t cry … Don’t raise your eye,” they sang. “It’s only teenage wasteland.”

And so, the Games ended as they began. With song and celebration. On a stage full of athletes, who likely will inspire a generation, the night ended with the perfect song. This was their generation.