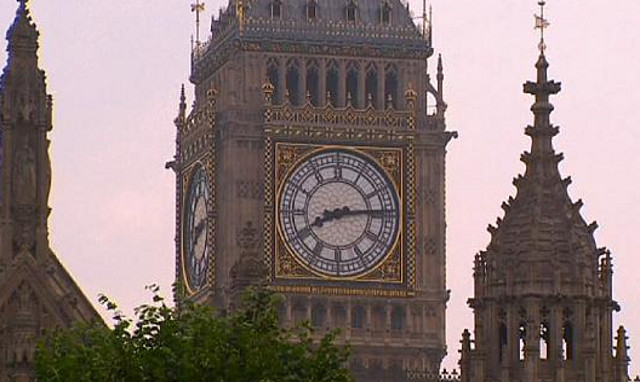 Churches across the UK and British embassies around the world got into the spirit of the bell-ringing extravaganza, devised by artist Martin Creed as part of a 12-week programme of cultural events celebrating the arts alongside sport.

People were encouraged to ring any kind of bell — from a church, a bicycle, a door and even a mobile phone as the harmonious ringing spread from Wales in the west to Weymouth in the south.

One of the biggest bells taking part was London’s Big Ben in parliament’s clock tower, the first time it has rung outside its regular hours since the funeral of King George VI in 1952.

It chimed about 40 times between 8:12 and 8:15 a.m. after special permission was granted by parliament.

Creed, whose won the famous Turner prize with an installation of lights going on and off in an empty room, created “Work No. 1197: All the bells in a country rung as quickly and as loudly as possible for three minutes.”

“It was open to anyone to take part,” he told BBC television.

“I thought that maybe if I did something with music or making a noise it could go out across the city, you know, and across the country.”

More than 10 million listeners were expected to have tuned in to the live broadcasts shown on TV, radio and online. The BBC showed British Culture Secretary Jeremy Hunt ringing handheld bells at an event on London’s HMS Belfast ship on the River Thames.

In Beijing, the British embassy rang its bell which was cast in 1897 for Queen Victoria’s Diamond Jubilee while staff at the High Commission in Bangladesh rang rickshaw bells.

In Brussels, the British ambassador rang the bell at the Belgian Stock Exchange to begin the day’s trading.