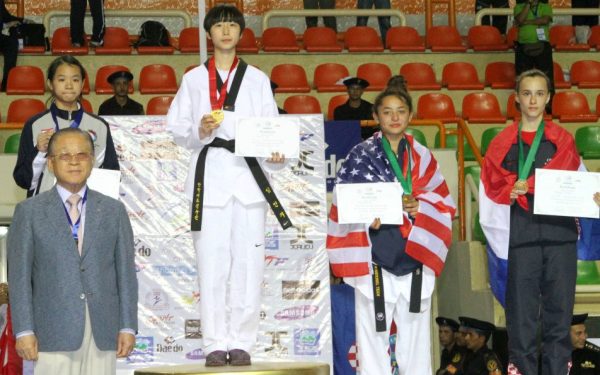 Geremy Escolta can’t keep track of how many kids he has knocked out. The 16-year-old has fought countless number of times since the age of 5. But it’s always been on a mat.

“If you don’t need to fight, just walk away,” said Geremy, who won a gold medal last week at the Jr. World Taekwondo Championships in South Korea. “I’ve never been in a fight, so knock on wood.”

Martial arts has infused Geremy with the confidence to walk away, even if a bully taunts him. But not every kid has that ability. “My goal for him was just to be able to defend himself and not be bullied in school,” said Greg Escolta, his father and teacher. “And I just wanted to make sure he wasn’t the worst in any competition, and for him to be the best, it’s amazing. He’s given me many proud moments this year.”

Greg Escolta, with the help of his youngest son, is sharing his knowledge at Redwood City Martial Arts, which is based out of Powerhouse Gym. About a dozen adults ranging from 17 to 58 signed up to learn taekwondo and kenpo. Roughly the same amount of kids — ages 5 to 12 — are taught self-defense, competition sparring and bully-proof training.

“My own thing is I wasn’t doing it for profit,” Escolta said. “I wanted to help kids that needed to learn how to defend themselves. And it just so happens that my first three students were bullied in school.”

One of the girls almost died from an incident at school. After 2½ months of training, she competed at the Stanford Open against competitors from locales such as Alaska, Oregon, Washington and Idaho with much more experience.

“All three kids took gold,” Escolta said. “And these were girls who were scared if you said ‘boo’ to them.”

Geremy, a top wrestler at Sequoia High in Redwood City, has added grappling basics to the classes. His coach, John Peavler, helped his father set up the dojo at Powerhouse Gym. “JP and I are both trying to develop a martial arts culture here in Redwood City with the wrestling and taekwondo,” said Escolta, who has set a goal to qualify all of the kids for nationals next year.

But even if the kids don’t make it that far, the message is getting through that just because you can win a fight, doesn’t mean you have to start one. That’s the difference between Geremy Escolta and a bully.

“There is no way to really stop it,” Peavler said of the issue. “What you can do is teach the youth how to deal with it. And what youth martial arts really does is build confidence. It teaches kids how to carry themselves. And any dojo or any workout facility worth its weight teaches that code of honor that you never use your discipline unless you have to, unless you’re backed up against a corner.”