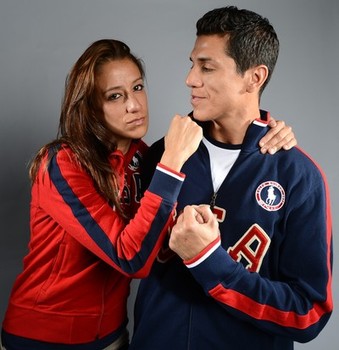 Although the medals in taekwondo were the same color, the attitudes were very different.

“Going from a two-time Olympic gold medalist, it was tough, honestly. When I train, I train to win,” said Steven, who won gold in Sydney in 2000 and Athens in 2004. “When I was up there, I was thankful for winning a medal for the United States, but this time around it is a motivating factor for me to go back and get my gold medal.”

“Now we are in the same boat going to London. We are both going for that gold medal,” Diana added.

Julio Lopez was born in Nicaragua. He and his wife moved to New York in 1972, where their two older sons, Jean and Steven, were born. They later moved to Sugar Land, Texas, where Mark and Diana were added to the Lopez family tree. Jean won a silver medal at the 1995 world championships and is now the coach of the U.S. team.

Mark won a silver medal in Beijing four years ago.And I have already told you about Steven and Diana. At the 2005 world championships in Madrid, Steven, Mark and Diana all won gold medals.

It all started in the family’s garage in Sugar Land. “My father loved watching Chuck Norris and Bruce Lee movies, but he didn’t have the opportunity to try martial arts himself, so he started with my older brother Jean,” Steven said. “My parents saw character development skills that martial arts teach you — respect, self discipline and humility.” All the Lopez kids had a niche for taekwondo and were very good at it.

But Steven was special. “That light bulb switched on in me, and I realized at that moment what I wanted to do. It wasn’t a question of ‘if.’ It was ‘when.’ It was going to happen,” he said.

“The Olympic dream started in 1988 for me. Seoul was the first time taekwondo was an exhibition sport.” He was only 15 when he first made the national team. That year he went to the World Cup and had the opportunity to fight the current Olympic and world champion.

“Technically, he was better than me. But I gave it to him. I won a bronze medal. I knew then that I was up there,” Steven said. Before fighting world champions, he had to take on some bullies in the school yard.

“When I was 9, there was a kid at school who kept beating everybody up. I psyched myself out and the kid beat me up,” Steven said. “I remember crying and looking at myself in the mirror and saying ‘God, you punked out.’ I told myself this will never happen again. Even if you are Godzilla, I am going to give it to you.” Some brave guys challenged him after that just to check out how much Ninja Turtles or Karate Kid he had in him. They soon wised up. But the bullies who didn’t found out the hard way.

“I stood up for the kids being picked on. I took care of the little guys,” Steven said. The Lopez legacy in taekwondo won’t end with Jean, Mark, Steven and Diana.