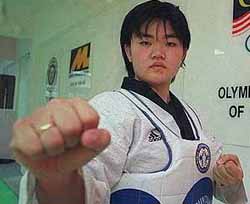 The former SEA Games gold medallist is now back where it all began — as a coach for Sarawak taekwondo team at the Sukma in Kuantan.

And she is hoping to get her charges to kick up a storm in the taekwondo competition, which begins at the Universiti Pahang Malaysia Sports Complex in Gambang, Kuantan, today.

Wan Yuen, who won the girls’ heavyweight Sukma gold medal for the first time in Perak in 1994 before going on to retain it in two subsequent editions, has been in charge of the Sarawak taekwondo squad for the last six months.

The Pahang Sukma taekwondo competition will be Wan Yuen’s biggest assignment as a qualified instructor since making a brief comeback from retirement at the Korat SEA Games in 2007.

“Sarawak returned with two gold medals at the last Sukma in Malacca but I think the asso- ciation have set a fair target for us,” said Wan Yuen, who won silver and bronze medals at the Asian Games in 1998 and 2002.

“The gold medals will be spread out this time among the states as everyone will be wearing the electronic body protector. The system will be used for taekwondo at the London Olympics and this is the first time it will be used for a competition here.”

Wan Yuen has only one advice for her exponents and that is “to fight with confidence”.

“I want them to be happy and proud of their performance. When I was fighting, that was my attitude,” she said.

“But I do not want to put too much pressure on them. I have been through it all and the pressure to live up to expectations is great, even in Sukma.”

Taekwondo offers a total of 18 gold medals for Sukma this time.

3 thoughts on “Sarawak hoping for medals”