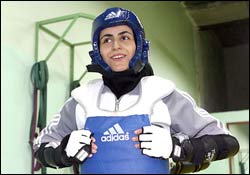 Sara Khoshjamal Fekri, is an Iranian taekwondoka and the first Iranian female taekwondo Olympic qualifier. She is an undergraduate student of physical training at Tehran University. She competed at the 2008 Summer Olympics, defeating Ghizlane Toudali of Morocco in the round of sixteen before losing to Yang Shu-Chun of Chinese Taipei in the quarter-finals.

Her religious code requires strict adherence, so she wears a headscarf under her helmet. There’s never been a woman to compete in her discipline, so she competed with men, and broke their bones. Meet Sara Khoshjamal, the first female Olympian from Iran, and the decimator of odds. She won the Taekwondo bronze in 2010 Asian games and now her eyes are trained at a podium finish in London.