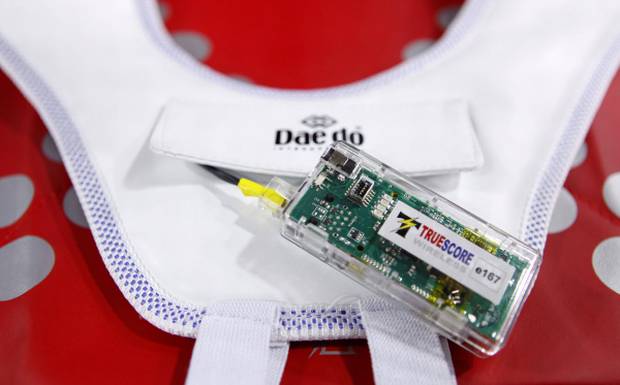 When his 13-year-old son lost a national taekwondo championship match because of a judging error, Jin Song knew he had to do something about it.

“That made me mad,” said Song, an engineer who has practiced the martial art for about 30 years. “I thought there must be a better scoring system.”

That was in 2000, the same year that Song and a half-dozen other engineers and taekwondo practitioners started the technology company Truescore Inc. to create a better system.

As a result of their work, taekwondo athletes competing at the London Olympics next month will be scored for the first time by a wireless system produced by Truescore and Spanish gear maker Daedo that uses technology developed by .

The technology creates a faster and more reliable and accurate system that aims to eliminate human subjectivity in judging. It’s an example of how Dallas-based TI is finding new applications for its semiconductor chips and other components.

TI innovations have made it to the Olympics before. The company supplied the chips used in 150 projectors during the four-hour opening ceremony of the 2008 Summer Olympics in Beijing.

The World Taekwondo Federation sanctioned the use of the Daedo/Truescore electronic system, which includes a protective vest, footwear and other gear, at the London Olympics and other competitions. The Olympic taekwondo events are scheduled for Aug. 8-11.

Although the system is new to the Olympics, it has been used in many matches, including U.S. Olympic team trials, ESPN’s Titan Games and the World University Games.

Here’s how it works: Each competitor wears a vest embedded with sensors and footwear embedded with magnets. As the foot approaches the vest, the sensors anticipate the approaching magnet and register the impact and force of a blow, eliminating false readings from elbows or inadvertent contact.

TI does not make the sensors; its components are contained in a modular transmitter — slightly larger than a pack of gum — that attaches to the back of the vest. TI’s technology is used for data acquisition, processing and communications in real time:

The vest, called a hogu, scores only kicks to the torso. Judges use hand-held controllers, which are part of the wireless system, to score other blows. The vest costs about $350, but the entire system costs about $1,200, Song said.

For TI, it’s a convergence of several major trends: the growing wearable sports and fitness market, remote control, the movement of sports toward electronic scoring (fencing and soccer, too) and the ability to deliver more data faster and more efficiently.

In the wearable fitness market, for example, TI components are used in MetaWatch’s smartwatches and Motorola’s MotoActv, a music player and fitness tracker, he said.

For the Olympics, the taekwondo scoring system had to be fast (able to process up to four kicks per second) and accurate and consume as little power as possible, Song said.

Truescore “takes away any politics in scoring, especially in a world competition,” said Steve Rosbarsky, a coach for Missoula Taekwondo Center in Montana who last month brought 20 athletes to the USA Taekwondo National Championships in Dallas. The scoring system misses some blows, but so do human judges, he said.

“I really like it because it’s made the sport a lot more fair and transparent,” Lambdin said. “There will always be human error, and this takes that out of the equation. Missed kicks occur, but far less often.”

2 thoughts on “Olympic taekwondo will use wireless scoring”