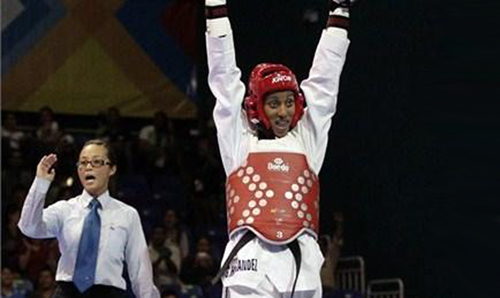 The martial art was plagued by scoring issues at the Beijing Olympics, and the results of one heavyweight women’s fight were overturned. After nearly being tossed out of the Olympics, taekwondo revamped its scoring system, introducing electronic body protectors that register kicks and punches if they have sufficient force.

At a rooftop demonstration of the new scoring system Wednesday, Ayer said the changes also make the sport more exciting for fans.

Coaches can use video replay at least once if they want to contest a point. If the technology allows, Ayer said those challenges will be played on a big screen at the London Games, much like Hawkeye replays points at tennis matches.

Kicks to the head, which score the most points in taekwondo, will still be scored by judges. To increase safety, the federation also recently changed its rules: Kicks need only to touch a competitor’s head — no force is necessary.

Ayer predicted the taekwondo fights at the London Olympics would be much more action-packed than before. With a smaller fight area and up to four points for head kicks, Ayer said competitors will be motivated to kick high.

“We will definitely see a lot of high kicks that will make the fights very dynamic,” he said. “But those kicks will be fast, so people need to pay attention.”