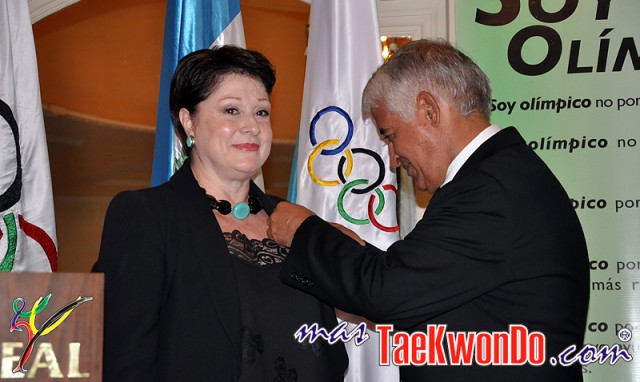 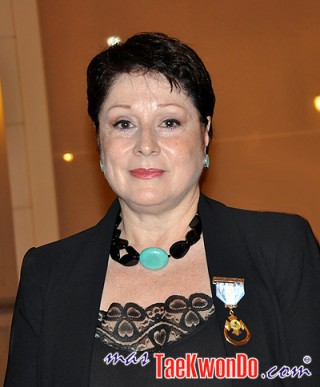 A few years ago, masTaekwondo.com issued an article titled: “Mary Borello The Iron Lady of the World Taekwondo” and today she returns to press headlines after being awarded within the Olympic Movement.

During the WTF World Junior Taekwondo Championships held in Sharm El-Sheikh, Egypt in April 2012, we have already mentioned about the work that Mary Borello had been doing with the different members of the IOC, working tirelessly to create a permanent positive image of Taekwondo in the eyes of the IOC.

The award was presented recently by General Sergio Camargo Muralles, President of the Guatemalan Olympic Committee, who has long been working with Borello in a joint project which main objective is “with culture, education and sport, we will develop our youth.”

A few months ago, we also published a note informing about a recognition given to the president of the Aruba Taekwondo Federation, Jose Chaco Cornelio, who was awarded with Orange-Nassau Award, a recognition given by Queen Beatriz from the Kingdom of the Netherlands.

Additionally, Maria Borello was given the “Award to the Sports Excellence” in 2004 and the “Women and Sports Achievement Diploma” in 2005 and 2009, recognitions awarded by Dr. Jacques Rogge, President of the Olympic International Committee. In 2003, the President of the Korean Republic also recognized the efforts and work done by Ms. Borello, when he awarded her the “Sports Merit Medal”.

Mrs. Borello has worked for years in various programs. She has created training programs at various public and private schools where now, Taekwondo is an official class in their curriculum. She has also promoted Taekwondo in the Military Aviation School, where young officers are receiving training to improve their fitness condition, improve their self defense techniques and in a short time period, participate in the military championships organized worldwide.

Her programs have also been focused in the needy and excluded. The Guatemalan Taekwondo Federation is helping children suffering from Down syndrome and children in poverty. These programs help build self-esteem, develop leadership skills and strengthen their social relations. Currently, they are implementing the program “Kids Kicking Cancer”, a program which goal is to help children with this disease, empowering them physically, spiritually and emotionally, while struggling for his life. Inmates are also involved in our programs because the Guatemalan Taekwondo Federation is working on their social reintegration through training, discipline, and promotion of values and principles, cornerstones of Taekwondo philosophy.

We consider outstanding the fact that leaders of our sport get awards from organizations that are not exclusively from Taekwondo world; it means that our sport is getting farther and, at the same time, it is closer to staying in the Olympic circuit.