During the South American Championship held in Argentina, the President of the Pan American Taekwondo Union, Ji Ho Choi, and the General Manager of masTaekwondo.com, Matías Rojas, met alone (recorder on the table), to discuss about various issues related to the continental Taekwondo and also about the accusations Choi made to masTaekwondo.com calling them “Cyber Terrorists” …

Mr. Choi, what balance can you make about your management of PATU?

Everyone knows what PATU was before compared to what is now that I am in charge. Since I took this position I designed an 8 year plan, and now we can all see the results made in this past 4 years, however if I continue leadering within this next 4 years I plan to continue with my 8 year plannification to surpase all our limitations and improve the level of all the countries. 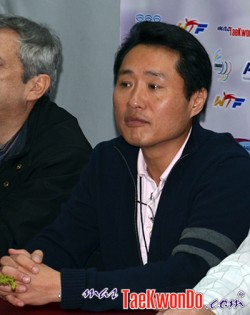 How are you preparing for the upcoming elections to be carried out in Bolivia?

The issue of the elections is a very delicate, and sensitive subject, I did not come to this tournament to make campaign, I came to talk to the presidents and I think that what is important is that all the Southamerican presidents have achieved unity so that they can work together.

Do you feel certain tranquility knowing that so far there are no candidates?

Candidates may appear for the elections in Bolivia, even during the moment of the elections, I do not care at this time about the campaign because I have served PATU for over 15 years and I think I have done my best during this time. If other candidates appear they will be welcome, but this is something that does not concern me at this time.

Do you understand that media can be a threat?

As leader of PATU it is not my idea to have a news agency on my side, we respect all media. I believe on the power of the press, it may end up with someone or turn it into a superstar.

When you have a news organization you have a commitment to the public or the community that follows you, and you can not be on one side or the other.

Mr. Choi, our commitment is delivering the truth and our readers have to know about it and have to have access to information about the governing organism.

We gladly share the information that comes from an Executive Committee, but we have to keep a lot of discretion regarding internal process decisions, because is a way to protect the integrity and confidentiality of the executive committee members. Often explaining the reason for making a decision as the press asks to do can be very sensitive and delicate, because it involves the same process of making that decision, so the acts regarding the public are gladly publicly shared, but the others have to be reserved.

Regarding the letter you sent to all presidents of the countries in Pan America, alerting them to beware of masTaekwondo.com, do you still think we are cyber terrorists as you expressed there?

To me that is already in the past. The fight is not our principle of return, the idea is to always give me the opportunity to explain, when someone receives information from one side, because is not fair to give information without hearing my point of view first. 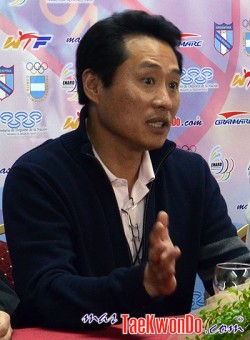 Precisely in our note Ji Ho Choi called to an Exco and Council meeting, we consult you directly and the response was not as expected.

Ok, regarding the subject of the meeting in Oregon, I distributed the information only to members of the Executive Committee one day before I received a call from masTaekwondo.com, that means the day after the information was sent, asking me about what was going to be decided there.

It caught my attention to know how did masTaekwondo.com got this infomation so quickly as it was a private communication only for executive board members. I was really offended, it was unpleasant for me since it was an internal matter of the Executive Committee and it had already leaked to the public and was generating a set of requirements by masTaekwondo.com, and I have to protect my members.

It is ok to publish the news about the meeting that will be carried out, but not to make questions so quickly, that’s why I asked how masTaekwondo.com had received this information .

As I mentioned earlier Mr. Choi, our commitment is delivering the truth and if our community asks for information, we do not wait for the next day, if we have it available and proven, we will publish it at the moment or the next minute, you can not ask us to be inefficient.

Until then none of the member countries of PATU we consulted were aware about a Pan American Junior U.S. Open, they never received an official invitation, much less communication about a council meeting.

There was a lack of time and the reason for organizing the event so quickly is that we had an WTF Executive Committee meeting in Egypt on April this year, where we proposed to hold such events to cadets and youth, and what we wanted was a precedent and meet with WTF, to repeat this series of events for those ages.

There are certain decisions made for other reasons, in this case the championship in Oregon could be specified as an experimental event, the idea is that the Pan American countries focus more towards young ages instead of just adults.

In Buenos Aires, the same South American presidents noted the great lack of information they have on the actions of PATU, and due to such absence, the Taekwondo community relies on masTaekwondo.com to obtain information.

I respect masTaekwondo.com as the leading media in Pan America, we had a very interesting conversation during the last Pan American Championships in Monterrey, and now after this new meeting I will be very happy if in the future we can avoid such incidents that for me today they are part of the past. I aspire to always go forward and I do not want to give attention to the issue of rumors.

MasTaekwondo.com is not against PATU or against you, we understand that both organizations, though in different ways, seek the same goal: and that is to make the Pan American Taekwondo grow. We hope that if you are reelected, this will change and we can publish the great achievements that PATU will achieve for its countries.

Thank you very much for your time.

2 thoughts on “Key meeting between masTaekwondo.com and PATU President”