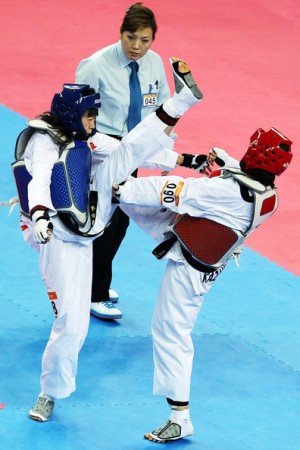 A taekwondo oxponent from Shymkent, Nursultan Mamayev, turned 18 this year. This is only the second year where he will perform in the adult age group. However, despite this, he has already achieved considerable success in the international arena. Thus, Nursultan immediately excelled at last year’s Asian Championship in Bangkok, where he won a silver medal. Nursultan Mamayev became known while competing in junior tournaments. In 2008, he won the “Children of Asia” Games in Yakutia and in 2010 he won a silver medal at the first Youth Olympic Games in Singapore.

“My father enrolled me in taekwondo when I was seven years old. I had ups and downs during these years and even wanted to quit sports because of tough and exhausting training sessions. However, whenever I felt that way my parents would remind me of my goal to win a medal at the Olympic Games. This is the reason why I took up taekwondo. And now I’m close to making my dream come true.”

Taekwondo experts believe that Nursultan Mamayev has a good chance of climbing the Olympic pedestal in London. This optimism is reinforced by successful performance of the young Shymkent resident in the last season of the World Cup in Germany, where Mamayev beat many strong contenders.

“I believe that our team will win a medal in London. We have what it takes to do this, judging from our athletes’ performance at recent international taekwondo tournaments and the tremendous job we did in training.”

One thought on “Kazakhstan taekwondo team prepares for London Olympics”