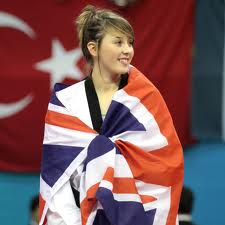 She credits the support of her home town for getting her this far and said: “Obviously I’m going there for gold and I won’t be happy with anything less.

“If I’m mentally on it and I fight like I want to fight, I’ll be happy. Training has been going really well.”

Although born in Bodelwyddan, Denbighshire, Jones grew up across the border in neighbouring Flintshire. She started taekwondo aged eight when her grandfather Martin got her interested to keep her off the streets.

By the age of 15 she had dreams of competing at the Olympic Games, and in 2010 she won gold at the Singapore Youth Olympics – partly thanks to the people of Flint.

Local businesses and pubs raised the £1,600 she needed to go to the Youth Olympic qualifiers. She said recently: “The people of Flint have always been supportive and have played a big part in my progression, so I was keen to thank them and explain that their generosity was worth it.

Jones discovered she had been selected for Team GB in June, but had to keep it secret from her family.

She said her mother works at a butchers on the high street and people would always be asking her “how is Jade getting on, is she going to the Olympics?” while they were buying their sausages.Now, there can hardly be a person in the town who has not heard of Jade Jones and her Olympic hopes.

A big screen is also being planned in the town so as many people as possible can watch Jones compete in August.

Her grandfather Martin Foulkes, 57, took Jones to her first class. Mr Foulkes has high hopes for his granddaughter. “She has the ability to do it but anything can happen because it’s a full contact sport and she’s going up against world class fighters,” he said.

Family friend Lynda Leigh, who organised the pre-Olympics party, said: “We’re so proud as a town, the place has really pulled together to support Jade.

She will leave for London on Thursday, 19 July.

With the town firmly behind her before she has even left, one can only imagine the reaction if Flint’s Olympic hopeful returns victorious next month.