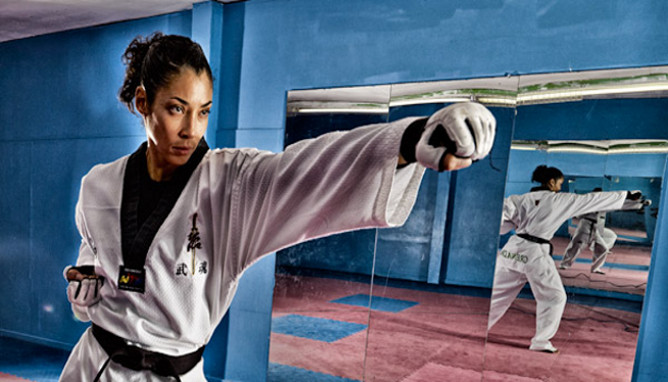 St. Bernard, a 3rd-degree black belt born in Grenada on October 2, 1979, has been representing Grenada for years on the world stage. In 2007, Andrea won bronze medals at the Pan American Games and the U.S. Open.

St. Bernard earned a bid for the London 2012 Summer Olympics in November 2011 via the Pan American Taekwondo Olympic Qualification Tournament in Queretaro, Mexico. Andrea lost her semifinal match, but qualified for the Olympics by beating Katherine Alvarado of Costa Rico (11-8) in the third-place contest.

The competition consists of a single elimination tournament for each weight category. The winners of each contest qualify for the next round with the two finalists fighting head to head for the gold medal.

All competitors who lose to one of the advancing fighters at any stage of the competition enter the repechage. The two semi-final losers meet the winners of the two repechage pools; these matches determine the winners of two bronze medals.

Taekwondo competition events begin on August 8, 2012. St. Bernard will compete in the preliminary round (under 67 kg) at the ExCel Exhibition Centre’s South Arena 1 on August 10.

2 thoughts on “Andrea St. Bernard will represent Grenada in Taekwondo at the London”