As published last week, Portugal came to Athens with a combined team reduced to less than half compared to other selections. Seven athletes were responsible for achieving the highest position possible according to the final general computing.

“We are really happy, that we were just surpassed by Russia in the general computing, which competed with 16 athletes. This is an historic achievement for Portugal” Joaquim Peixoto exclaimed to masTaekwondo.com, shortly after the European Championships in Athens.

Of the five male Lusitanian athletes, three were gold winners and two got a 5th place after losing in the end against who consecrated as champions.

“As a team, Portugal had never occupied a place on the podium in official competitions, neither European nor World and in this Continental Championships we beated the 37 selections and we were able to achieve something that we had never achieved before.” Said Peixoto.

As for the female performance Portuguese coach told us: “Portugal is reactivating the internationalization project of the female team. The two athletes who participated in the European Championship had a well performance, they ended as quarterfinals against competitors who came to the podium. ” 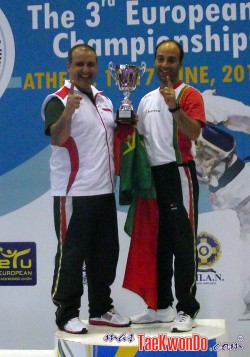 Peixoto permanently highlights Peter Campaniço’s performance, who defines him as a great friend and a great coach, “We were together on this great achievement!”.

Portugal has become undoubtedly, in a team that regardless that it usually presents itself with reduced teams, it always leaves a mark on the championships wherever it goes. Its rise began since 2007, when Pedro Póvoa, who was accompanied by Peixoto, was consecrated as the European Olympic Qualifier Champion in Istanbul, and from that time a new generation of athletes began writing the story of “Lusitanian Taekwondo“.