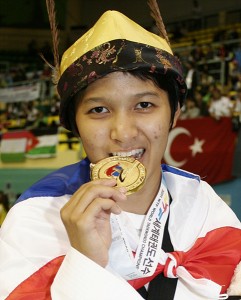 Thailand secured three taekwondo places at the London Games and Pen-ek Karaket and Chanatip Sornkham had earlier been selected to compete in the men’s 58kg and women’s 57kg respectively before the Taekwondo Association of Thailand yesterday handed the women’s 49kg place to Rangsiya.

Officials said the 18-year-old has improved lately and feels more comfortable competing in an electronic uniform unlike Worapong who has just returned from injury and cannot yet handle the new scoring system.

Rangsiya won an Olympic spot for Thailand at the Asian qualifying tournament in Bangkok in November, six months after she won the country’s first-ever world title in South Korea.

In Olympic taekwondo, each country can pick whoever they want to represent them regardless of who has actually won the initial berth and Thailand coach Choi Young Seok said that the trio had the potential to become successful in London.

The three are currently receiving a salary of 40,000 baht a month for three months and will train in U-tapao until they leave for London on July 28.

Both Pen-ek and Chanatip are scheduled to compete at the Olympics on Aug 8 while Rangsiya will be in action the next day.

Thailand’s taekwondo exponents are among the biggest medal hopefuls at the 2012 Games.