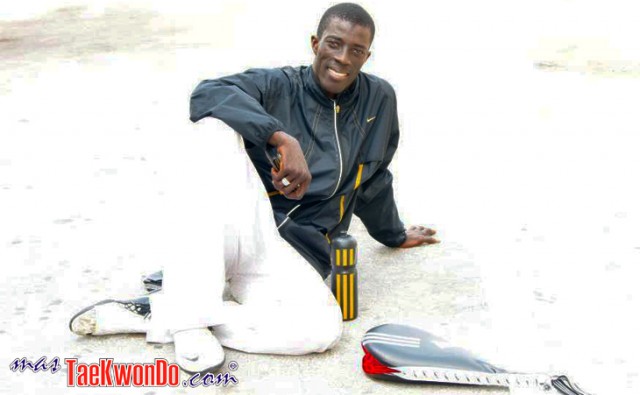 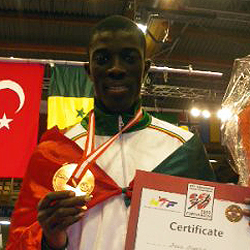 The Copenhagen 2009 World medalist, was third in the African Continental Championship Qualifier held in Cairo, Egypt, and thus failed to qualify for the Olympic Games in London. We met him in Galicia, Spain and so we took the opportunity to interview him to learn more about our sport in Senegal.

We would like to know, how is Taekwondo in Senegal? Do you have a good number of athletes?

Taekwondo is very important in Senegal, it is the second biggest sport in our country. So many people practice it, in places like school, the military field and is expanding to many regions of Senegal. Taekwondo is growing more and more.

Does the Senegalese government gives the athletes the necessary support? 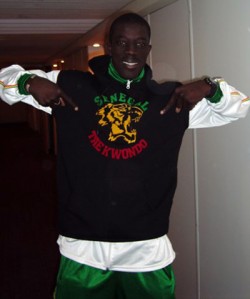 Sure, the Senegalese government supports its athletes and Taekwondo because is an Olympic sport. There are also other Olympic sports which the Senegalese government has a policy to support and assist the athlete in their training to reach the Olympic medal. Now the Senegalese Olympic Committee has new policies as providing scholarships for higher level athletes and they also want to give money to the athletes that will compete for a medal in the Olympics. We also have the support of the Federation that helps some athletes that train in other countries for Senegal.

What kind of reward do athletes that return to Senegal with medals or awards get?

The government, the Federation and the Committee support all athletes that return with medals, as it is very important for the international sport of Senegal, because if you get this international medals it makes people, the government, the minister and the population of Senegal, happier and it is also very important for all athletes competing for Senegal abroad. It is a second motivation because there is not much employment and the government gives athletes who go to other countries to compete and get medals, money for their home and family. Actually this is all very interesting.

What are your goals for this year?

My first goal is to compete in Abidjan, Ivory Coast, where the 8th Francophone World Cup will take place in mid-June, as this is very important for the Olympics. I would like to get a medal in Ivory Coast. Then in November we will have the Games in Africa, another very important event for our continent, so I have a busy year.

How will you prepare to achieve these objectives during 2012?

I am currently training in France. I really feel comfortable training there, the level that France has at the moment is known, therefore it is very important for me to work with this level of competition.

What other places will you visit for your training and preparation?

It is possible that after I finish here in Galicia I prepare for a month in Korea and then to Mexico for another month and a half. Then I have camp in France, the program is quite long, I have several camps in France.

For how long have you been training Taekwondo?

I have praticed Taekwondo for many years, around 22 or 23 years.

During these years which countries have you visited training?

I’ve been to many countries such as Korea, France, Senegal, Netherlands, Spain, USA, however I have not visited Latin America.

I like all the countries because each have different culture. For example if I go to Korea, I’m very respectful with their culture, in USA is all about performance and every country in Europe is different.

What satisfactions have you gotten from Taekwondo?

Did you ever think about leaving the sport for some reason?

Yes, Taekwondo is a very difficult sport, because you have to train hard, and sometimes there are many rewards, but others your mind does not have the strength to do it or you don’t have money to train. The Olympic classification for Taekwondo is very difficult and is very different from other sports such as Judo, because to qualify for the Olympics it does not matter how you are placed in the ranking, for example, we have to Modibo Keita of Mali that has won twice the World Championship and failed to qualify. Taekwondo is very difficult. I got the gold medal in Africa and I will not compete in London. However, this is something that is only in God’s hands. My focus is on God and my thought is to go to the Olympics, because I love Taekwondo, after my family is Taekwondo, is like my second family, I have many friends, I can even call my friends from Guatemala from Senegal and greet them and this is something that you can get only by being an international athlete.

We know that Bineta Diedhiou from Senegal qualified for a place in London 2012 in the -57 kg division. What does Senegal expects from her? 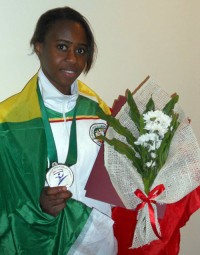 This is her second qualification for the Olympics. Last season she gain a lot of experience, and now she is ready to go to London. We know it’s difficult because the approach is the medal, as in Senegal there is only one medal for all Olympic sports, it is a silver medal won in Seoul in 1988. It is very important that Bineta goes for a second time to the Games and she has the ability to win a medal. Now we have to work very hard because this division is very difficult, all women are really strong, we have Cuba, Britain, China and Taipei China. We must be strong physically and mentally.

How did you feel getting a third place and not have the chance to qualify?

My fight is quite different because it is God’s will. I will not go to the Olympics because God did not want me to go. Now I support my team despite not going to these Games.

If possible we will see you in the next Games in Rio de Janeiro.

Sure … if I have good health, because every year I have a new motivation. Rio is very important. I have no Olympic medal however I have medals in Africa. I’m training hard and there’s still time for Rio. Next year we have the World Championship therefore every year I gain more experience.

Is there something you want to add to this interview?

All people in Senegal visit masTaekwondo.com every day, for me is the second means of communication after the WTF, because it has a lot of information. And in a minute you have everything that happens in the world. Taekwondo is practiced a lot in Africa and so masTaekwondo.com is very important.

What is the most spoken language in Africa?

It is divided into four. They all speak English, West Africa speaks French, South Africa speaks English and Spanish, Portuguese and Spanish is spoken in Central Africa. There are people who visit masTaekwondo.com and can read and understand the news in Spanish and English. This project of masTaekwondo.com is very important because there is information every day and every time.

Balla thank you very much and good luck.

2 thoughts on “Interview with Balla Dieye, leading figure in Senegal”