The meeting was held via teleconference after a Sunday Times investigation claimed that people around the world had been caught offering to sell thousands of tickets on the black market, including for the top events, like the men’s 100 metres final.

Undercover reporters from the Sunday Times posed as Middle Eastern ticket touts and they allege they found 27 officials and agents representing 54 countries who were willing to ignore the strict rules on selling Olympic tickets.

Greece’s Spyros Capralos, the President of Hellenic Olympic Committee who last month played a leading in the ligthing of the Olympic Flame in Olympia and the handover ceremony in Athens, is among those alleged to have breached regulations, says the Sunday Times.

Capralos, who represented Greece in water polo at the 1980 Moscow and 1984 Los Angeles Olympics, is alleged to have boasted he had “pulled strings” with London 2012 chairman Sebastian Coe to allocate his country more top tickets to the Games on the pretext that demand in the country had outstripped expectations. 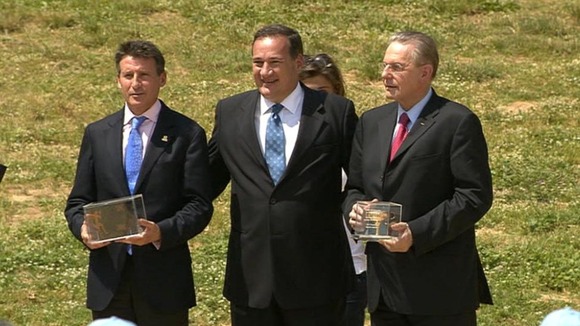 But Capralos, 57, (pictured above centre with Coe, left, and IOC President Jacques Rogge, right) said, in truth, demand was “very low” and few tickets had been sold there, the report claims.

“The leverage is because we are telling them that some Greeks or some of our sponsors would like to come and watch the Games,” he reportedly said.

“We don’t tell them how these tickets will be sold and we’ll be making a profit.”

The Sunday Times back up their allegations with filmed video evidence.

The tickets they were offering were allegedly supplied by the official UK hospitality reseller Thomas Cook.

An executive from one major ticket reseller in several countries, Cartan Tours, advised a prospective buyer to set up a company in one of the 40 territories in which they had the right to sell tickets, the Sunday Times allege.

While the report says Lithuania’s official agent, Asta Zirlyte, boasted she had withheld tickets from her own country so they could be sold on the black market. 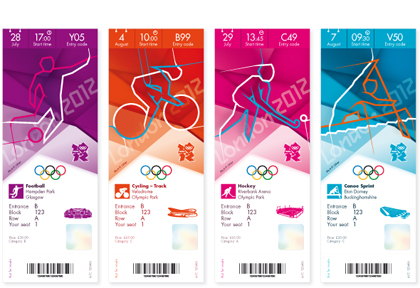 “If I take a risk and they catch me, that means your tickets will be cancelled,” she allegedly said.

“So you have to understand the risk.”

A total of 1.2 million Olympic tickets were released to NOCs around the world for London 2012, who bid for their share of the ticket allocation based on demand in their countries.

This system resulted in officials exaggerating local demand so they could get the maximum number of tickets, the Sunday Times claims, despite them being forbidden to sell their tickets abroad or to anyone who plans to resell them.

“After claims that several NOCs and ATRs were reportedly willing to break the rules by offering to buy or sell tickets outside their territory, sell tickets at inflated prices, or sell tickets to unauthorised resellers, the IOC has ordered an immediate inquiry and referred the allegations to its independent Ethics Commission.

“On being informed of the allegations, the IOC immediately convened an extraordinary meeting of its Executive Board and determined a number of actions – the convening of the Ethics Commission and asking for any evidence of wrongdoing to be provided to the Commission without delay.

“The IOC takes these allegations very seriously and has immediately taken the first steps to investigate.

“Should any irregularities be proven, the organisation will deal with those involved in an appropriate manner.

“The NOCs are autonomous organisations, but if any of the cases are confirmed the IOC will not hesitate to impose the strongest sanctions.

“The IOC has also determined that it will take on board any recommendations coming out of the inquiry to improve the way that tickets are allocated and sold internationally in the future.” 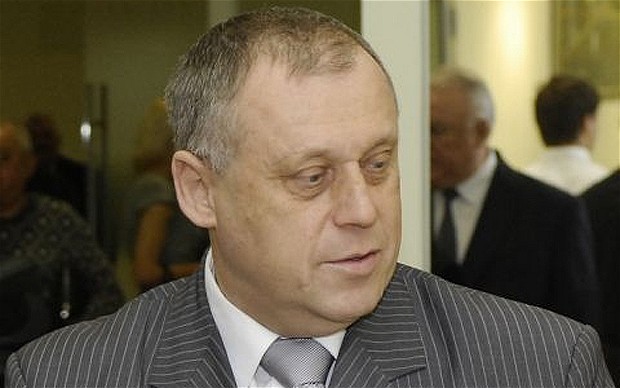 The allegations follow a BBC investigation last month that saw Volodymyr Gerashchenko (pictured), the 66-year-old general secretary of the National Olympic Committee of Ukraine, resigning after being filmed offering tickets for cash.

A London 2012 statement on the latest allegations tried to reassure people that none of the tickets allegedly offered to the Sunday Times were meant for sale in the UK, which is heavily oversubscribed.

“None of the tickets in question came from the allocation to the British public,” the statement said.

They also denied that Coe had provided with Capralos with any more tickets than Greece was entitled to under its allocation.

“With regard to ‘boasts’ by the Greek Olympic Committee that discussions on tickets took place with Sebastian Coe we can confirm this is untrue,” the statement said.

“Seb received a letter from the HOC – as he did from other NOCs – and responded saying that tickets had been allocated in accordance with the IOC’s ticketing policy.

“There was no further contact – either formal or informal – on this subject.”

Source: Inside the Games