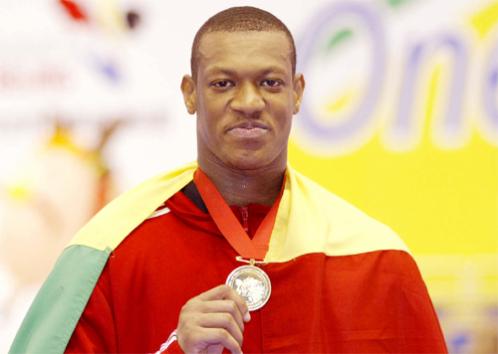 Daba Modibo Keita is a world class Taekwondo athlete. The 6′ 8″ native of Mali won the world championship in the heavyweight division back in 2007, and he competed for his home nation at the 2008 Summer Olympics in Beijing. This summer he returns a little older, and wiser.

He is preparing for his second try at Olympic gold for a nation that has never medalled in the games.

He trains in Alexandria at Remarck Sport Taekwondo, which is sending four taekwondo athletes to the London Olympics, including Modibo Keita and Alexandria native Terrence Jennings.

They train under the guidance of coach and former Olympian Patrice Remarck, who is also trained as a mathematician and physicist. In the 2008 games, Modibo Keita advanced to the quarter finals but was defeated by Nigerian Chika Chuckwumeriji, who went on to win the Bronze medal.

No athlete from Mali has ever won an Olympic medal and Modibo Keita intends to change that.

Part of the success of athletes such as Modibo Keita lies in the coach’s scientific approach to training called Taeametrics, says school co-owner Danielle Remarck. (Patrice Remarck was traveling abroad.)

“He does a lot of advance mathematical theory and calculation,” Danielle Remarck says. “He uses biomechanics, angular momentum a lot of positioning of the body that most people don’t normally use.”