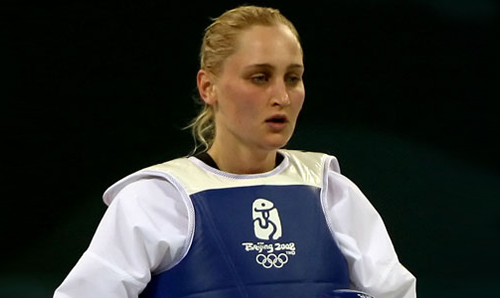 Mr Khalil’s brother Ali was selected as the Olympic coach. Ms Marton and her partner have been training hard in the lead-up to the event.

While she looked forward to heading over and being a bit of a tourist, she said there was still a lot of work to do to prepare.

“It definitely won’t be a holiday, but we are looking forward to going there,” she said.

“We have a week and a half before our event is on so we do have time to go through the athletes village and hopefully do some sightseeing.

“We’re going to be doing all of our hard work in Australia and sort of ease off the training a bit in London and then focus on our competition days.”

Ms Marton was first introduced to the art of taekwondo at eight years of age, when her father “forced” her and her siblings into it.

But it wasn’t long before she and her siblings were doing it willingly and looking forward to the lessons, and at 14, Ms Marton competed in her first overseas competition.

“Later than year I made the senior national team and from that moment on I was definitely taking it very seriously and never missed a session,” she said.

“I did all I could to go overseas and make international teams because I just fell in love with the travel, with fighting international opponents and looking at different cultures.”

It wasn’t long before Ms Marton directed her sights towards the Olympics, and after narrowly missing out on being selected for the 2004 Athens games, she made it through to Beijing in 2008.

“My childhood ambition was to always be a world champion and it’s still my dream, still my number one,” she said.

“My experience in Beijing was almost the same as my experience at 14, where I experienced it once and just wanted to do it again and again.”

Ms Marton currently trains at the Melbourne Taekwondo Centre, at one of its bases in Knox, Malvern and Glen Waverley.

With her love for the sport that has her whole family involved, it’s not hard to see why Ms Marton would continue her involvement for more years to come.

“The world championships next year is what’s on the horizon after the Olympics and we’re hoping to do a training camp in Mexico at the end of the year,” she said.

“As long as my body holds up and I still have passion for the sport, I definitely want to stay as competitive as I can.”