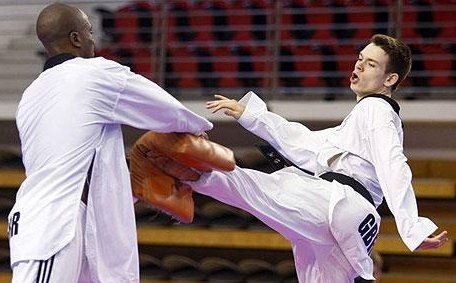 Cook had to claw his way back in the final against world number one Ramin Azizov, eventually seeing his opponent disqualified with one second remaining.

“I feel sorry for him because it was close, but thankfully I came out on top,” Cook told BBC Sport.

He added: “I’ve had so many decisions go against me in the past and finally one’s gone my way.

“I’ve lost to him three times and it feels so sweet to beat him.”

After trailing for much of the match Cook became increasingly agitated by Azizov’s stalling techniques, which invoked what is known as ‘kyong-go’, warning penalties.

These began to add up and with the British fighter still pressing in the final moments Azizov pushed the referee’s patience too far and by running out of the ring to defend Cook’s final attempt to tie the match, the Azerbaijan fighter was hit with ‘gam-jeom’ – a penalty deduction, which handed Cook victory.

“I just thought I’ve got to keep the pressure on and I was fortunate to get him out of the ring,” said Cook.

“Some people might say that I lost it, but I know in my heart that I won.”

Use accessible player and disable flyout menusHe added: “The [Olympic] selectors still have to make tough decisions, but I’ve beaten some fantastic players who are going to London so hopefully I can get picked.”

For Harvey, who won a World Championship silver medal in South Korea last year, victory in the non-Olympic -63kg division applies a little pressure on team-mate Martin Stamper, who will compete on Sunday and who is currently the lead contender for the -68kg Olympic place.

“This is the last competition before the Olympics and I’ve done as much as I can, so all I can do now is hope,” Harvey told BBC Sport.

“Martin [Stamper] is a good friend and I wouldn’t be unhappy if he went and became European champion, I’d be over the moon for him and will be supporting him tomorrow.”

“That girl isn’t better than me,” stated Jones.

“She didn’t even qualify for the Olympics, I just switched off and didn’t play my game and then the gap was too big to pull back.

“I need to do something to make me more focused and more switched on from the start because I can’t let that happen in the Olympics.”

Three medals for Great Britain took their total to five for the competition following Amin Badr’s bronze on Thursday and Lutalo Muhammad’s stunning gold on Friday.

GB Taekwondo fighters Stamper and British Champion Bianca Walkden are expected to be in the mix to increase that tally on the final day of competition in Manchester.