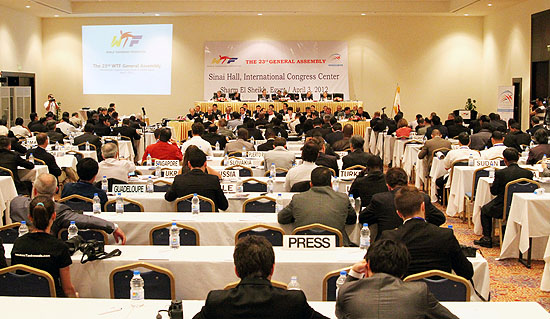 The approved new full member countries are the Federated States of Micronesia, Nauru, Palau and Seychelles. With the new additions, the WTF ranks among the top eight International Sport Federations, in terms of the number of affiliated member associations.

The WTF General Assembly took place at the International Congress Center in Sharm El Sheikh, one day before the opening of the 9th WTF World Junior Taekwondo Championships. The five-day championships, which will run until April 8, drew 749 athletes from 88 countries.

The revised Competition Rules, which is effective starting the championships, stipulate, “When any part of the foot touches the opponent’s head, it will be regarded as a valid point.” The rationale is that for the safety of contestants, impact shall not be any more requirements to score three points.

The new Competition Rules also stipulate, “In the last 10 seconds of the third round and in any time during the sudden-death or golden-point round, any of the judges can ask for instant video review and correction of scoring when a coach does not have appeal quota. The rationale is that winner of taekwondo competition is decided very often in the last minute of the contest. When a coach does not have an appeal quota, there is no way to give another chance for review unless any of judges ask for correction. This is a special measure to ensure that the scoring is corrected when there is any mistake.”

The General Assembly was also briefed on the WTF Global Membership System, the preparations for the WTF’s 40th anniversary of founding, and the “I Love Taekwondo” and “Friends Guard” project.

At the start of the WTF General Assembly, WTF President Chungwon Choue presented a plaque of appreciation to Mr. Jin Suk Yang for his five years of service as secretary general of the WTF. WTF President Choue also gave a letter of appointment to Mr. Jean-Marie Ayer as new WTF secretary general, and two new WTF Council members – Mr. Heinz Gruber of Germany and Mr. Milan Kwee of Singapore.

Mr. Jhong-shin Bae, new chairman of the Taekwondo Promotion Foundation, was introduced to the participants in the WTF General Assembly.

The next WTF General Assembly will take place in the Mexican city of Puebla in 2013 on the occasion of the WTF World Taekwondo Championships.