Moon Dae-sung, a former star Olympic taekwondo champion, was elected to the new National Assembly in last week’s elections, but has been under pressure to leave the party amid concern the plagiarism allegations could hurt the image of a party that has been trying to shake off its corrupt image. 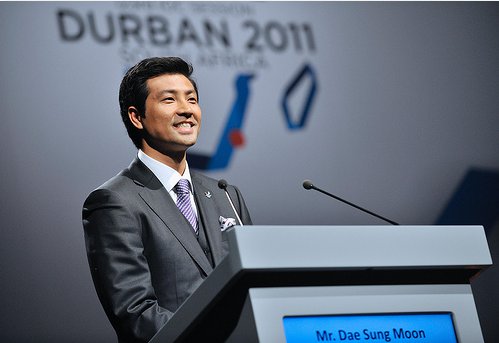 Moon has denied the accusations and refused to quit the party, insisting that he would wait until Seoul’s Kookmin University, from which he earned his doctorate in 2007, decides whether he actually plagiarized.

On Friday, the university determined that much of Moon’s paper matched another person’s work, including some parts of the research subject and purpose, and descriptions in the preface and the theoretical background.

Similarities went seriously beyond the usually tolerated levels in the academic world, it said.

Moon apologized for “causing trouble” to the people, and quit the party.

“Everything is my fault,” he said in a statement. “I made up my mind after I was asked by the party (to quit).”

Moon said he hopes the incident won’t heighten the public distrust in politics or work against the party’s efforts to reform itself and win December’s presidential election.

Moon, 36, rose to stardom after winning gold in the 2004 Athens Olympics with a spectacular knockout kick in the final. He later became an athlete member of the IOC and a professor at a university in Busan.

His departure came two days after another lawmaker-elect left the ruling party over allegations of sexual assault, and cost the party its hard-won majority in the 300-member new parliament. The two departures will leave the party with 150 seats in the new parliament.

The cases were an embarrassment to the ruling party that has taken a series of sweeping measures to win back public confidence after leading presidential hopeful Park Geun-hye took its helm in December.

Those efforts had appeared to have paid off as the party won an upset victory in the elections.