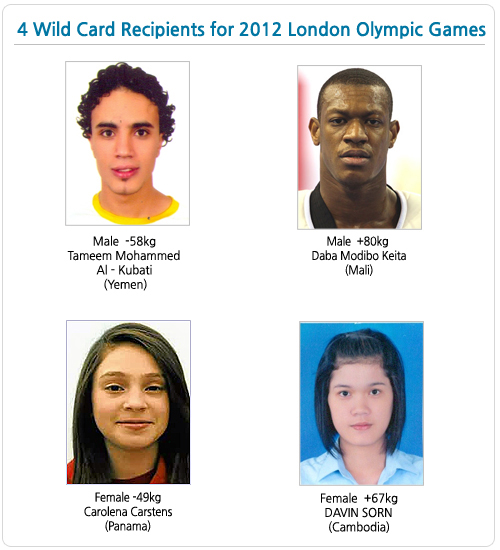 Among the wild-card recipients are Cambodia’s Davin Sorn, ranked 51st in the women’s +67kg on the WTF Olympic World Ranking and the fourth placer at the Asian Qualification Tournament for the London Olympic Games; Mali’s Daba Modibo Keita, ranked 42nd in the men’s +80kg and third placer at the African Olympic Qualification Tournament. Mali’s Keita was the world champion in 2007 and 2009.

Of the 63 countries, 10 countries are qualified to send their athletes to the taekwondo competition of the Olympic Games for the first time. They are Cambodia, Lebanon, Tajikistan, Grenada, Jamaica, Panama, Armenia, Serbia, Samoa, and Algeria.