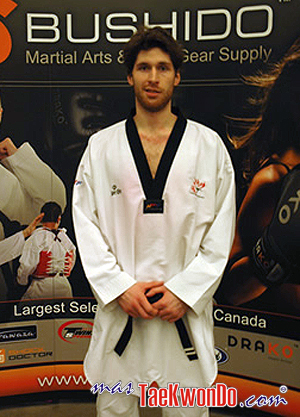 Michaud, a Division 3, 80kg fighter, has been training with his Coach, Alain Bernier at Club Taekwondo Sainte-Foy for the past 15 years. In a career that spans 20 years, it is fair to assume the coach-athlete pairing have found a formula for success. Michaud is just four months away from competing in his second Olympic Games.

In describing how he felt both mentally and physically at the 2012 Nationals and Senior Olympic Team Trials in January, Michaud contextualizes the circumstances under which he was performing. In doing so, he reveals the very nature of the sport and the reality that a match (and Olympic berth) can change in an instant:

“It was one of the most stressful competitions of my life. Even though I had excellent results in the past years and I was supposed to win this tournament, there are a lot of surprises that can happen. Just imagine that you’ve won all the competitions in the last four years to get this Olympic spot and someone had a lucky day and took it from you.”

The 24 year old had a simple answer to explain his Olympic-berth match versus finalist, Olivier April-Lalonde, whom he defeated in the final seconds of the first match.

“I did my job. Nothing too aggressive, nothing to passive. I just dealt with his good day.”

Michaud referenced feeling a monumental release upon earning a place on the Olympic Team; the victory had surely relieved him of the pressure that had mounted along the four-year road to adorn the red and white once again on the sport’s biggest stage.

With just over four months remaining until the London Games, Bernier and Michaud will not make any major changes to their training. Michaud will aim to peak only once: at the Olympics.

Although Michaud claims to most enjoy the rest portion of his training schedules leading up to the summer Games, he is looking forward to competing at the upcoming Dutch Open and Austria Open.

“He is an experienced athlete who has good taekwondo qualities,” adds Michaud.

Once the Olympics get underway and Michaud is in the thick of the event, he highly anticipates being in the midst of the Olympic Village and the atmosphere as a whole. Michaud sites his opponents as the biggest challenge at the Olympics – simple, yet true.

“My opponents will be the 15 best in the world. Each athlete has specific qualities and strengths. It is such a good level of competition that all of the competitors will challenge me.”

Unselfishly, Michaud credits his training partners for being the single, most influential factor in preparing him for reaching this level of Taekwondo. And when referring to the level he would like to achieve at the biggest sporting event of his thriving career, Michaud poignantly says, “The gold medal.”