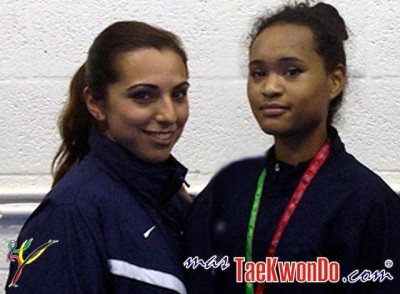 Marlen Ramírez Monroy had been part of the selected Mexican Taekwondo team for around ten years and was able to achieve big challenges. After this she worked as a coach for young athletes and the last time we saw her as the Mexican coach was during the Youth Olympic Games in Singapore.

Today Marlen has become an important part of this big machine that moves the team work of the coach of the National Team of the United States, Juan Moreno, who has assured two of his members to the Olympic Games London 2012.

The work on Peak Performance comes from a program that Juan Moreno started ten years ago. We know that in order to obtain and maintain a result requires time; in this case the great success we´ve had during the last two years has been a result of constant work. There have been some strategic changes on the Electric Protector and we´re still working on it. The club requires strong trainings and compromise by the athletes.

How does it feel to be part of this team?

Certainly is an honor to be part of this team full of passion and devotion to Taekwondo. This does not mean that we measure who is better and who is not, we all pull out from the same rope and our goal is to compete and enjoy. The result comes from a strong commitment in the trainings.

Have you worked hard on Paige preparation?

It has been a year since I came to Miami and Coach Juan Moreno made me part of his team and I have been able to experience and maintain my job with them. I really enjoy training there and do steps with them as I used to with my youth team back in Mexico, even though I´m not in charge of leading them I do get the chance to express my ideas.

Paige got the chance to choose her team and she chose me to become part of it. We started to work together but in a different way. I do believe my experience can provide her a good preparation, Juan Moreno believes on my job and so does she, so I give out my 100%, I just put on my protector and we start doing steps, by the way her hits are very strong… and so our goal is to prepare her and TJ for the Olympic medal.

Which do you consider the most important areas on TJ and Paige that could help them reach the podium for London?

During this past four years Taekwondo has had so many modifications, for instance the Electric Protectors aren´t easy to use for many athletes; however on the contrary, we have others that can manage them easily. They both have facility to use them plus on the physical area they are strong, hit hard and have flexibility on the area face.

As a Mexican you have also experienced the classification system where the athlete does not have his or her ticket assured, do you think that whoever classifies should get the ticket?

During my career as an athlete and now as a coach I´ve noticed that every time an athlete´s goal is to compete for his o her country, they always win the evaluation process and this is something that happens around the world.

From my perspective as a coach, we always want to take the best team, however I think that I wouldn´t do an evaluation, instead I would prepare them physical and psychologically by taking them to important events were they can feel nervous about a competition and to evaluate them like this by making an approach for the Olympic Games.

I really think that making this evaluation only adds more psychological and physical stress instead of using this time to make a good preparation.

There is an article in masTaekwondo.com, by Ángel Alonso where he states that Juan is one of the best coaches throughout the continent, how does it feel to work with him?

I do agree with Ángel. Juan is truly an honest coach, not only he works for the athlete to provide results but also helps them to carry out a life after the competition.

He provides personalized trainings, he knows exactly each of the opponents of each category; he has been an Olympic medal winner in two occasions, and he knows perfectly the measure of the court, he knows their athletes really well and how they think; he is a passionate athlete and knows really well all the changes the sport has had, such as the new PSS and coaching. I think this has been important for his success as a coach.

Thank you very much, would you like to add something or thank someone?

Yes, I would like to congratulate everyone at Peak Performance; we all got there to the end, also Coach Juan Moreno for his great work and to TJ and Paige for their great job on this event and for reaching the goal. I also want to mention Danielle Holmquest, who didn´t reach any position but did a great job and masTaekwondo.com for this interview and for giving us the opportunity to express ourselves and I congratulate you for the professional work you always do. Thank you very much. 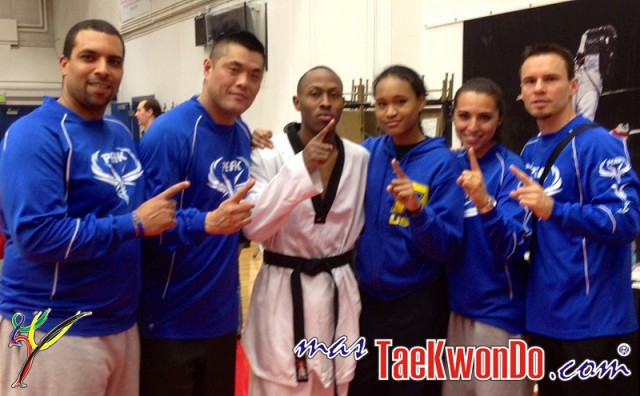 Her home is in Sturgis, South Dakota, but she was born in 1990 in Abilene, Texas. However, she currently lives in Miami, Florida. Paige is the fourth from five siblings (all adopted) and they come from different races: Korean and Afro-American. One of her brothers is Korean and her parents thought he could practice Taekwondo, since this is the national sport of his country; Paige used to follow his steps and this is how she got involved into this sport and now takes her to the Olympic Games London 2012.

When did you start dreaming about this moment?

I heard that you have a very unique family of adopted brothers and sisters of different ethnic backgrounds. Tell us about this

People always call the McPherson family, “the rainbow family”. The reason is because my parents adopted five children from different parts of the world. My two oldest siblings, Aaryn and Graham, are part Native American. After them is Evan, who is from South Korea. I like to call him myself “Blasian”‘ because I am half Filipino and half African American with a little Spanish and Japanese on my Asian side. Finally, there is Hannah who is from Saint Lucia.

Even though we are from different parts of the world and have different personalities, we are and will continue to be a big and happy family.

Just like TJ, you had a great 2011, in brief, what was your process of growth as an athlete to become the JJPP Sub Champion and now getting ready for the Olympics?

I am not the same person as I was a year ago. All the pressure that TJ and I had to deal with and to just keep on believing and focusing on our goal was what made us the athletes and Olympians we are today.

Interestingly you also had to defeat an Olympic medalist, where do you think lies the greatest strength of your team?

Peak’s strength comes from always being consistent in training hard. Coach Moreno puts us through practices that are harder than actual competitions. Also Peak is a family of fighters who want to be the best. No one is ever on top at every practice. Someone else always has a better practice than another, therefore we all improve together.

Can you imagine yourself on the podium at London 2012?

I have imagined myself on the podium all my life and to listen to our National Anthem. By God’s grace, I hope that it will come true.

Who do you dedicate this victory?

I just want to say that I am truly honored to be able to represent my God, country, family, Peak Performance, friends, and all who support me. Also I want to specially thank my parents, without their love and support as well as sacrifice, I would not have been able to fulfill my dream.