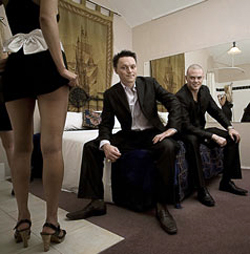 An Auckland fighter who opened a brothel to pay his way to the London Olympics has been named in New Zealand’s taekwondo team.

The then 23-year-old hoped to pay his way to this year’s tournament off the earnings of prostitution.

At the time, Campbell said he hoped to raise up to $300,000 from the red-light enterprise on Cross St and believed he was a real medal prospect with that kind of money behind him.

Campbell finished in the top 16 in the featherweight division at Beijing, after losing his first match against reigning world champion Yu-Chi Sung, of Taiwan, who finished with the bronze medal.

When interviewed about his business in 2009, Campbell was keen to point out he was not a pimp in the traditional sense.

“When people think of a pimp they think of a guy standing around on a street corner with gold chains. Pimps are more tough-type guys. I’m an owner of an escort agency.”

But his plans didn’t go down well with taekwondo officials.

In 2009 taekwondo New Zealand funding manager John Schofield said that although Campbell’s business would not affect his membership, it would be taken into account when he was considered for international selection.

“Selection takes into account not just performance but also the athlete’s ability to serve as an example to the youth of the country.”

Campbell’s foray into the adult entertainment industry isn’t the first for a Kiwi athlete.

Swimmer Toni Jeffs was sponsored by a strip club at the Barcelona Games and in 1999 it was revealed that Sydney Olympic hopeful Nicole Tasker, a cyclist, was lap dancing at an Auckland strip club to raise money.

Campbell, who will compete in the under 68kg division, has been selected alongside South African-born, but Auckland-based Vaughan Scott in the under 80kg division and Robin Cheong in the women’s under 57kg class.

Scott has credited his mum for him taking up the sport eight years ago.

While his official Olympic ranking sits at 20, recent performances place him 11th in the Olympic field, good enough to pass the New Zealand Olympic Committee’s over-riding standard of being top-16 material.

Scott, who trains on Auckland’s North Shore, once turned down a junior NRL scout and also excels at soccer and basketball.

“Vaughn is young and has improved fast in the sport,” said Master Oh.

“He competes in a very competitive division and in 2011 took on the world ranking No 3 player at the US Open. He lost by just three points.

“At London, the Olympic medal will go to the most focused athlete, not the most experienced. Vaughn will be aiming for early impact.”

Scott, whose mother holds a third-dan black belt in karate, said he will give his first fight his all. From 16 athletes in the Olympic first round, half will get knocked out.

“I’ve got to treat every fight as if its my last.”

Scott moved to New Zealand when he was eight and said his mother suggested he try the sport as a 14-year-old.

“She thought it would keep me out of trouble,” he said with a smile.

With qualification taken care of, the three athletes now have Olympic medals in their sights and say a new electronic scoring system will help them achieve their goals.

Campbell, who contested the under-58kg division in Beijing, said the change to electronic scoring at the Olympic Games is significant for New Zealand.

“It’s a huge leap forward as not only can they now record and score multiple points, any unconscious bias towards a higher-ranked athlete is also removed,” he said.

“We’ve got a good chance of bringing home a medal.”

The team train with the new system daily at their Browns Bay dojang.

Campbell finished in the top 16 at Beijing and, returning to the sport after a break, has moved up the rankings to currently sit at eighth. Full-time training, a sports psychologist and strength and conditioning are part of a new regime.

She competed in the under-49kg class at the Beijing Olympic Games finishing in seventh place.

Taekwondo first appeared on the official Olympic programme in 2000 following successful outings in 1988 and 1992 as a demonstration sport.

New Zealand has been represented in taekwondo by Veronica Wihongi (Athens 2004), and Matthew Beach, Campbell and Cheong (Beijing 2008). No Olympic medals have been won.

Selection announcements will continue through to July.