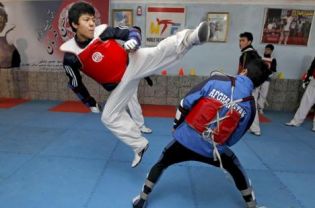 In a country wrenched by decades of war, perhaps it is no surprise that all three, a taekwondo male duo, including Beijing bronze medalist Rohullah Nikpai, and teenage female boxer Sadaf Rahimi, followed fighting sports.

They were born into a conflict that still rages, and chronic insecurity and poverty mean they train in spartan spaces with little financial support, and currently freezing cold in the country’s worst winter for 30 years.

Wearing red chest and back guards made from the material used in bullet-proof vests, the pair, who both recently qualified for the Games in Bangkok, make high-pitched screeches as they take aim, typical of the sport.

But despite officially qualifying and winning Afghanistan’s first Olympic medal at Beijing four years ago, Nikpai bemoaned the lack of support given to sports in his country.

“Nesar and I don’t have a good place to train, facilities or even a regular transport system and proper electricity,” he said, his breath steaming in the frigid air of the center, whose small heater did little to combat the frozen white landscape outside.

Poor conditions are not limited to taekwondo, whose national team members receive a miserly monthly stipend of $10 to $14.

“We can’t really compare ourselves to the world,” said Nikpai, who was lured to taekwondo after watching hours of action films as a refugee in Iran.

Nikpai received a hero’s welcome upon his return from Beijing and was summoned to meet Afghan President Hamid Karzai, who presented him with a new apartment, money and a car.

The head of the Afghan Olympic Committee, Gen. Mohammad Zahir Akhbar, said he hoped more athletes in wrestling, judo and athletics would qualify for the Games in London.

“We are war-torn, our athletes face economic and security problems, but we are aiming for medals,” he said.

First-time Olympian Bahawi, who took up taekwondo at the behest of his family because he kept kicking his friends, said triumph at international competitions could be a way to lift security at home.

“Sport brings a message of peace and stability in the country,” the tall 25-year-old said.