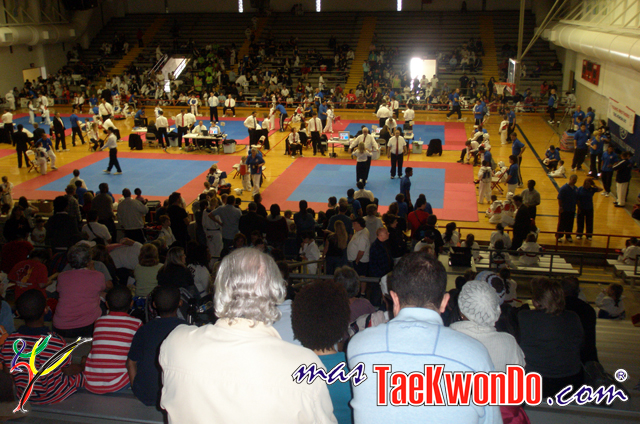 There are several qualifiers for AAU nationals depending on the area or region you live in. Like it is done every year, the Gulf Area tournament in Texas was hosted by Master Mark Giambi. The tournament was magnificent. It took place in a gymnasium stadium located in Houston. Every year this event is hosted in the well-known Butler-Stadium. Its large capacity was without doubt a great advantage since the event had many competitors participating and the stadium was completely packed with people. You could see how well this tournament was organized since the moment you set foot inside the stadium. Master Giambi’s wife, Kim Giambi, greeted the competitors and coaches as they came in to retrieve their badges and IDs for competition. With a permanent smile she warmly welcomed everyone in and kindly helped fighters and coaches by giving them their credentials quickly and in an orderly way. It always helps competitors and coaches when they are greeted and helped at the entrance of a tournament since they don’t have to worry about important things such as credentials, badges, and ID’s.

After acquiring their needed badge, competitors simply waited for their age and belt groups to be called on to staging. This went by smoothly since the wait wasn’t very long. Group after group was called on to staging where they waited to be put in to a bracket. The brackets were very accurately made, there wasn’t a very big difference between weight and height in each division made. By making a very fair bracket, all of the competitors in one division would have a fair chance at winning and wouldn’t risk the chance of getting injured by a bigger competitor.

After the competitors were put into brackets, they only had to wait a few minutes before being assigned to a ring where the division was to battle it out. The people in charge of making the brackets quickly assigned the divisions to a ring. Everything flowed smoothly in each ring. The judges were scoring fairly for both fighters. They used regular chest protectors and regular scoring systems at the tournament but it was still very well scored. The judges and referees did a great job in the rings.

The AAU Gulf District Qualifier was wonderfully organized by Master Giambi’s staff. Each year, the tournament gets bigger and more people from Texas attend. It is a great way to see what things you have to work on before going to Nationals. Without doubt AAU is a great organization with high quality events. We look forward to AAU Nationals taking place in Fort Lauderdale!