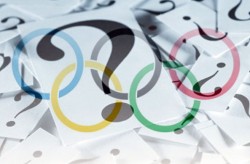 After the publication of the article “The cards are already on the table” an interesting debate emerged among our readers, where many were in favor and others were not.

Since Taekwondo officially became part of the Olympic Games, there were many adjustments done, in some cases it affected the excellence of the competition.

Remember that our sport normally consists of eight (8) male and eight (8) female weight divisions, adding for instance in a World Championship, categories that can reach 100 athletes, where in order to become a World Championship the athlete must overcome the seven combats, so that the Absolute World Championship becomes the must important title. However, in the Olympic Games it only takes two winning combats to get into the semifinals and in many cases they can get the Olympic Diploma without overcoming any match.

In order to get an Olympic Status, Taekwondo had to condense the weight divisions, from eight (8) to four (4) for male and female and only sixteen (16) athletes can compete for each division, this has left out a great quantity of athletes with a high level of competitive quality, however, on the other hand, and thanks to the classification system, there are others that classify and have not gotten an important title before or even a world podium, but because they have classified for the Olympic Games they call themselves “the best 16 of the world”.

There is an interesting fact that adds more controversy, each nation can only present two male and two female athletes to the Pre-Olympic Games, and this reduces into half the possibilities of getting medals; Possibilities that were already reduced before into half (from 8 to 4 and from 4 to 2) and there are divisions that logically will keep out potential countries such as Korea, Spain, China, China Taipei, Iran, Turkey, just to mention the most important ones for the World Championship.

But there is no point in accumulating great amount of scores in the WTF Ranking, since Taekwondo is different from sports like Judo, Fencing and many others where the best located in the Ranking are the ones who participate in the Olympic Games guaranteeing the level of competition, in our sport an athlete has to go through two classifications (World and Continental) in order to access to the Olympic Games, generating cases seen in the classifications such as the European or Asian (where only the three first ones classify) athletes with a great resume and privileged position in the Ranking are out, while in other continental unions athletes of very different competitive status classified.

Knowing that this article could cause some controversy, we will try to explain it all up with a couple of examples that just happened.

In the -49 Kg. female division, Papua New Guinea classified in the Pacific area. This athlete did not need to sweat her dobok, since for different circumstances she was left out and at the end she was the only athlete in the category, she classified in first place and accessed the Olympic Games for the second time, though she never obtained any important result and she added points in the Ranking only and thanks to this event. On the other hand Rukiye Yildirim from Turkey, No. 4 in the World Ranking, medalist in the Absolute World, College student, University Games, European Championship and winner of a great amount of Open Class A, was eliminated in the European area.

Another similar example among a lot, is Samoa, the +67kg athlete in the Pacific area, classified in London 2012 without the need of start competing, and now she is considered one of the best 16 of the world, and in Kazan during the European Pre-Olympics, we saw the elimination of No. 3 of the World and World Champion, Rosanna Simón from Spain.

Is it correct to say that the 16 of each division that classified for the Olympic Games are the best 16 of the world? Or is it best to be honest with ourselves and say that thanks to this classification system, we can see the participation in such great multi-sport event, athletes that never won a major title?

The creation of the WTF World Ranking that only meets the function to determine which athletes are seeded at the competing time, demonstrating the big difference there is between the 16 qualifiers for each category, we can see divisions which involve the No. 1 championship of the world but also the No. 90 of the world.

The following is a list of all athletes who qualified for the Olympic Games sorted according to their position in the Ranking. This list does not mean that these names are competing in London, since a lot of teams are doing their selections because the place is not for the athlete but for the country. 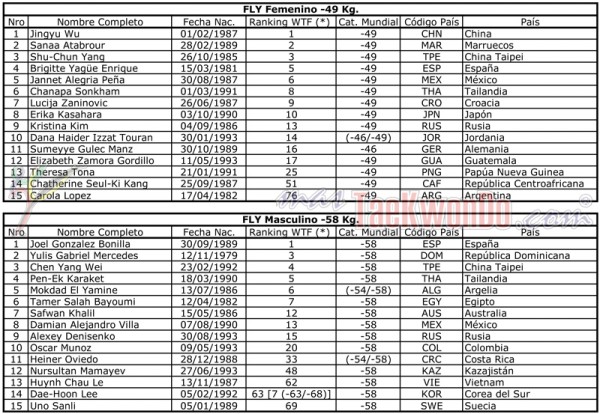 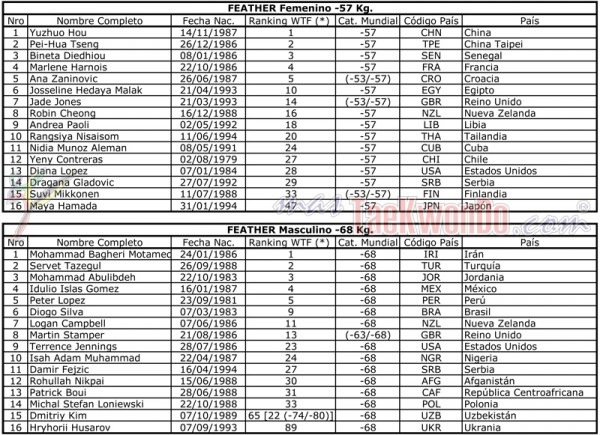 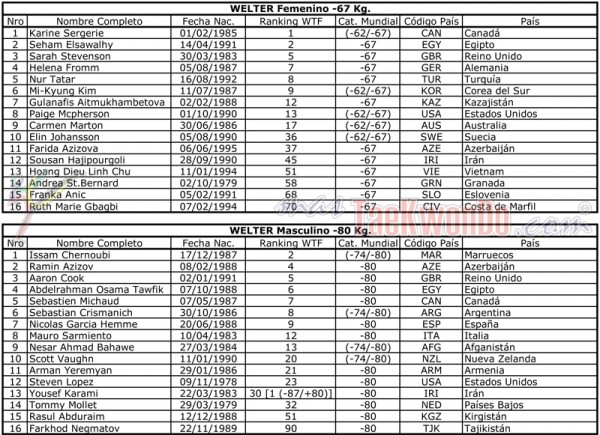 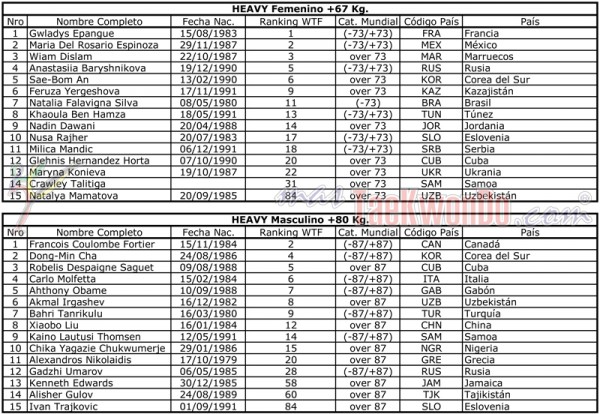