The news transcended during the European Olympic Qualifying Championship in Kazan, Russia ten days ago, where many executives were making comments on Yang´s decision. 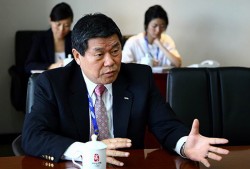 Recently he had had many differences with other leaders, as he himself in the majority of cases, assumed the responsibility to uphold the image and interests of the World Taekwondo Federation, and apparently all these situations had generated great wear on him, leading him to take this decision.

When we recently communicated with the WTF, they confirmed us the news, and according to the World Federation they will publicly and officially announce the news next Monday, February 13th. They also assured us that Jin Suk Yang will continue in the WTF but not in the position of General Secretary.

All indicates that this position has already been accepted by the Swiss Jean-Marie Ayer, founder of the company Dartfish, who for some time now works very closely with the President of the WTF, Dr. Chungwon Chue.

One thought on “Jin Suk Yang, the General Secretary of the WTF resigned”