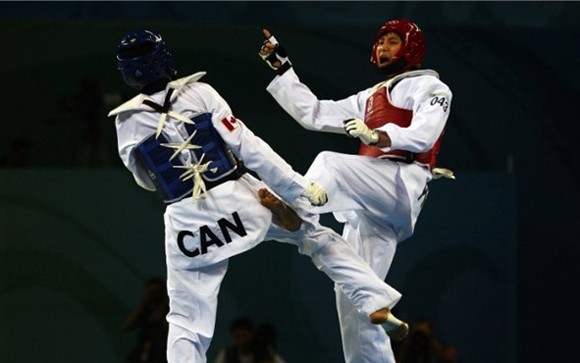 In the fourth and final day of competition, the Junior B concluded with the Female Light Middle, Female Middle, Male Bantam, Male Middle and Male Light Heavy divisions being contested.

After’s competition saw the Men’s and Women’s Division 3 get underway with a single elimination followed by a double elimination to determine the finalists to contest for an Olympic spot with Sebastien Michaud and Karine Sergerie, respectively.

In the Men’s Division 3, finalist Olivier April-Lalonde lost an exciting match in the final seconds to Michaud who will be attending the Olympics for the second time in his career. Michaud was overjoyed in the moments following his victory: “I was watching the other fighters so I know what I had to do to win. My coach and I strategized and knew the drop kick could work so when it did [in the final seconds] I was really happy.”

In the Women’s Division 3, it was Melissa Pagnotta who met Karine Sergerie in the final. Pagnotta won the first match to force a second match with Sergerie seeing the winner earn an Olympic spot. Karine won with a decisive 6-3 scoreline in the final to secure a place on the Olympic team for the upcoming Summer Games.

“It has been a really long, hard year for me health-wise so I’m really relieved and happy to have won today and am hoping to keep improving in the months leading up to the Olympics,” explained an elated and emotional Sergerie.

After his emotional reaction in the moment of victory, Coulombe-Fortier was calm and focussed as he reflected on his success. “It is still a long road ahead to prepare for the Olympic Games. There was a lot that went into getting here so there was a big release [of emotion] when I won.”