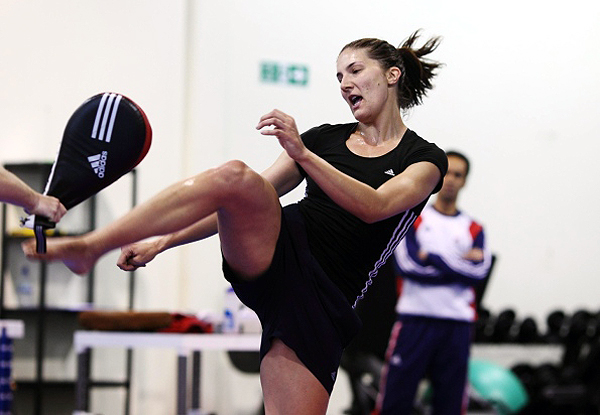 Sheffield’s heptathlon queen Jessica Ennis, pin up girl for the 2012 London Olympics manages it – and so does Doncaster’s super athlete Sarah Stevenson.

Sarah, a world champion Taekwondo exponent, was put through her paces at a media event at Sport City, Manchester yesterday.

The 28-year-old, a bronze medallist at the 2008 Beijing Olympic Games found the circuit training hard going and decided to treat herself to a little luxury soon afterwards.

She Tweeted: “Sat in hairdressers, in need of a pampering after a hard circuit. Sweat was pouring!”

Sarah, a former pupil of Don Valley High School in Scawthorpe, was controversially overlooked in the all-male shortlist for the BBC Sports Personality of the Year. But she was appointed an MBE in the New Year Honours for services to martial arts.

Recently she wrote: “People often ask how I got into taekwondo, but it’s always been in my family.

“My brother did it when he was young, so I just joined in. It wasn’t like I was raised on a diet of Jackie Chan and Bruce Lee movies and influenced to emulate them, nor was it a case that, like the Karate Kid, I was getting bullied so I started taekwondo to protect myself.

“I never really did anything else and never looked back.”

The European Taekwondo Championships are being held in Manchester on May 3-6.