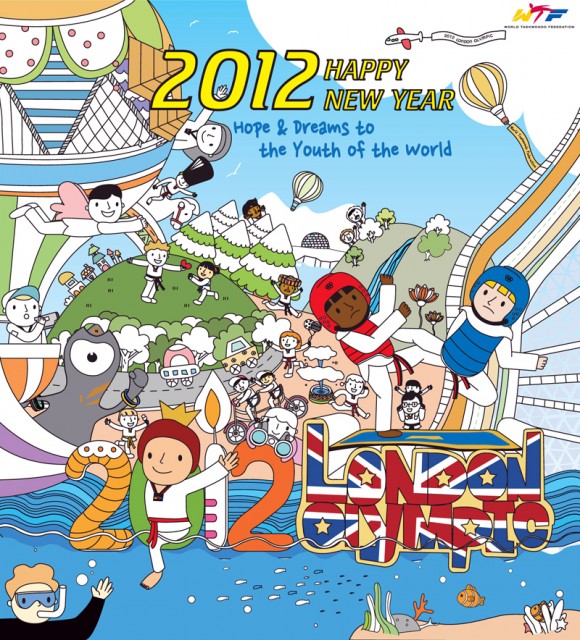 I would like to extend my warmest greetings for the New Year of 2012.

The anticipation has been mounting and another exciting Olympic year is upon us.  Yet these Olympics have a new and even more exciting element that highlights the World Taekwondo Federation’s theme for 2012, “Spreading Hope and Dreams to the Youth of the World.”

August of 2010 marked the inaugural Youth Olympic Games in Singapore.  Since this incredible event, we have watched as the youth of the world have begun to blossom through their hopes and Olympic dreams.  Already champions of the first-ever Youth Olympic Games will be competing in London as Olympians this year.  However, these hopes and dreams are the right of every youth around the world.

At the WTF Council meeting in Vladivostok, Russia in July 2011, and ensuing e-voting of the General Assembly, the WTF approved motions to establish WTF Taekwondo Peace Corps and WTF Taekwondo Demonstration Team.  These decisions will help facilitate Peace Corps activities to focus on youth taekwondo programs particularly those in the greatest need such as orphanages and youth in displaced populations.  They will additionally further help promote and develop the sport of taekwondo to help bring kids off the street and into a disciplined and goal-oriented way of life.

In 2011, the 3rd World Youth Taekwondo Camp, jointly organized by the WTF and the Taekwondo Promotion Foundation, drew a total of 254 athletes aged 14 to 20 from 27 nations around the world.  We are confident that the camp will draw a greater number of nations and athletes this year.  I hope that each of our members will do their utmost to provide this opportunity for their young athletes to come and train with Olympic medalists, experience cultural exchanges, and learn of the principles and values of the Olympic spirit.

Aside from the 2012 London Olympic Games in August, the year will also celebrate the 9th WTF World Junior Taekwondo Championships in Sharm El Sheik, Egypt.  It will also mark the 2012 World Cup Taekwondo Team Championships.  This World Cup will be the first time to be held under the new format of the 5 on 5 team format, which has yet to be finalized.  This exciting new format would bring a new dynamic element to our sport and the WTF is very excited for a continuation of the evolution of our sport.

These Olympic Games in London are a very important event for the WTF.  The countries that win medals or the number of medals won by any particular country will not determine the success of these Olympics.  The only factor that is important for success of the London Games is a fair and transparent competition, upholding the principles of Olympism.  This will help ensure taekwondo’s position as an Olympic sport and uphold the excellence of our sport to world, especially the youth.

The Olympic Games bring a spirit of sportsmanship, triumph, and glory to all that have ever seen or witness their greatness.  But this can only be achieved by the hope that is instilled within us that it is possible to achieve this, and it starts in the heart of the youth.  This year, we begin a greater effort of spreading these hope and dreams to them.  Even as each human being has the right to have these in their lives, surely it is our young ones that most urgently need them today.  The youth of today are the champions of tomorrow!

I would like to wish everyone an incredible year in 2012.  I am looking forward to great things within our family this year.  And may our deeds not only bring hope and dreams to others, but bring them alive within us, as well!