The 25-year-old from Liverpool sealed the honour with a -68kg silver medal at the French Open in Paris last Saturday.

It added to the WTF World Championship bronze and gold medals from the US, German and British Opens picked up by the ‘Super Scouser’.

Dad of one Stamper faced tough opposition for the prize, launched in conjunction with the British Olympic Association in 2005.

World Champion Sarah Stevenson and Welsh teenager Jade Jones, whose 2011 medal haul included a silver at the World Championships and golds at the US and British Opens, offered up some stiff competition. 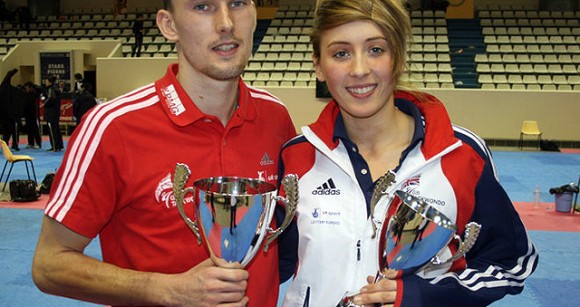 “It has been a great year and this has really topped it off,” said the London 2012 hopeful.

“I have put in some good performances in the past but haven’t turned them into medals. This year they have and I’ve managed to keep it going throughout the year.

“I am so proud to be awarded Athlete of the Year, even more so because the team has done so well and there have been some great performances from other GB athletes.

“I’ve worked hard this year and a lot of the credit must go to my coach Steve Jennings and to the support staff in the GB Taekwondo Academy.

Hall paid tribute to Stamper saying: “Winning the US and German Opens earlier in the year really set him up. And to then medal at the Worlds was a great achievement.

“He hasn’t stopped there and to sustain that level of consistency through the year is very impressive.”