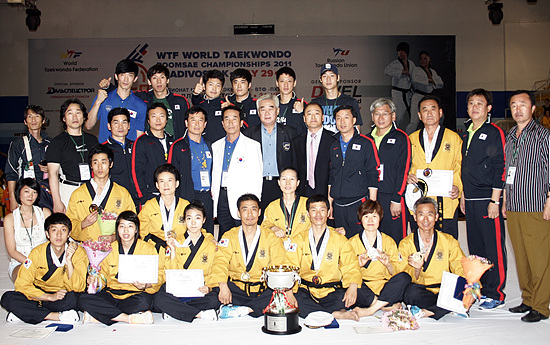 A total of 18 countries took home at least one medal at the annual championships, showing an even taekwondo poomsae techniques among nations.

Besides the poomsae competitions, there were five-country invitational five-member kyorugi team exhibition matches, a three-nation friendship free-style poomsae contest, and a friendship poomsae contest for WTF member national association officials and WTF Council members, all of them drawing special attention from both the jam-packed spectators at the Olympiets sport s complex and the international media.

According to the medal tally by nations, Korea topped others as it took home nine gold medals and one silver medal, followed by Vietnam with two golds, four silvers and one bronze.

Germany followed with two golds, two silvers and one bronze, while Chinese Taipei won two golds, one silver and five bronzes. Host Russia clinched one gold, four silvers and three bronzes, followed by Great Britain and Mexico with one gold medal each.

In the five-member kyorugi team exhibition final match, Korea beat host Russia 36-12 for the gold medal, while Turkey brushed aside a stiff challenge from Azerbaijan to won the bronze-medal decider 45-32 for the bronze medal.

A total of five gold medals were up for grabs on the third and final day of competition at the Vladivostok World Taekwondo Poomsae Championships.

In the men’s individual 2nd senior division for athletes aged between 31 and 40, Korea’s Jin-han Kim clinched the gold medal, while the silver went to Iran’s Mohammadtaghi Hatami. Turkey’s Mevlut Pekcan and Germany’s Marcus Ketteniss won the bronze medal each.