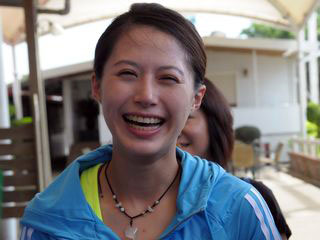 Yang said at a news conference that she made the decision because she wants to concentrate on preparing for the 2012 London Olympic Games.

“As long as I manage to win an Olympic gold medal, all the injustice I endured at the Asian Games can be settled and forgotten,” Yang said at the news conference hosted by the Chinese Taipei Taekwondo Association (CTTA).

Yang was disqualified at the 2010 Asian Games on Nov. 17 for allegedly wearing extra electronic sensors in her socks during a match, but replays of the bout showed that she had removed the two extra sensors before entering the ring, at the request of the referee.

The CTTA filed an appeal with the CAS on Dec. 8, 2010, after its appeal to the WTF failed.

The Swiss court was scheduled to hold an arbitration hearing on the Yang disqualification case Aug. 9-10.

Yang said an injustice took place at the Asiad, but the withdrawal of her arbitration appeal will not affect her pursuit of the truth and proof of her integrity.

“And I believe I will win due respect and honor if I can win a gold medal at the Olympic Games,” Yang added.

The taekwondo star finished third in a world qualifying competition in Baku, Azerbaijan on July 2 to gain a place in the London Olympics. In May, she won a silver medal in the World Taekwondo Championships.

“All these records have proved my worth,” Yang said.

Since the disqualification dispute, Yang has come into the media spotlight and won the full support of the Taiwan government and public.

“I’m very grateful for all the passionate support and encouragement from government officials and ordinary people over the past eight months…At one point, I almost decided to give up taekwondo…But I finally decided to continue to pursue career excellence as taekwondo is my biggest passion,” she said.

“Now I will devote my all energy to preparing for the Olympic Games and will not let any arbitration procedures bother me or interfere with my preparations,” Yang added.

“I hope the move will help bring us greater friendship and acclaim,” Hsu said.

According to Hsu, the Asian Taekwondo Union has apologized for a slanderous news release against the Taiwanese taekwondo team during the Asiad over the disqualification dispute.

The Union argued that the press release was posted on its website by hackers and it offered an apology for offending the CTTA, Yang and Taiwanese sports fans, Hsu said.

Hsu said the CTTA will ask the WTF to shorten its 20-month ban on Yang’s coach Liu Tsung-ta over the dispute, in light of the goodwill Yang has shown by withdrawing the arbitration appeal.