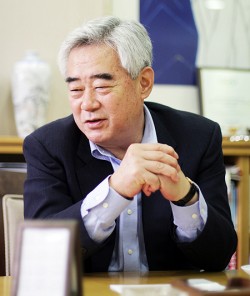 “This will be the first time the athletes will wear the new poomsae competition uniforms from the WTF, and it will be a meaningful event,” Choue said.

They are designed by Kim Nam-hee, a prestigious designer of modern Korean “hanbok” clothes.

Choue said the poomsae uniforms will show how practical Korean clothing is despite its beautiful and luxurious design. He also added it will be a chance to promote the nation’s traditional clothes.

Over decades of taking part in poomsae competitions in the traditional kyorugi uniforms, the WTF president took an active role in setting up the WTFad-hoc Poomsae Uniform Improvement Committee in 2006 to create a new uniform.

The new J-Calicu uniforms were named after a local producer that was given the right to provide the uniforms for the Vladivostok competition.

The newly designed poomsae uniforms define the new system of the poomsae world, according to Choue. The uniforms represent the different levels and are divided according to the five tenets of the sport.

They also consider eye-catching performances of the athletes by applying “pho,” or an outer jacket, on top of the uniform. The “pho” is to create sound and also to show the dynamic expression of taekwondo moves.

“The new uniforms should continue to be developed. We will listen to the participants’ suggestions including complaints, reactions of people, and all other matters during the Vladivostok competition,” Choue said.

“The ideas will be considered and applied in future editions,” he added.

The WTF plans to provide the new uniforms to master-level, or high-dan holders, free of charge at the upcoming event.

Choue’s creativity was shown from his emphasis on fashion in sports.

“Just like tennis or golf, the taekwondo uniform now embraces the fashion era,” he said.

“People from all over the world are now wearing the uniforms. It must satisfy people. There is no point applying the Korean spirit if people are not wearing them. Selfish ideas (pointing out Korean style only) are not right. We must level ourselves with the world.

I hope that the taekwondo clothing, whether kyorugi or advanced poomsae uniforms, will be turned into a fashion brand and become a trend leader for all including non-taekwondo people.”

He also hinted at a wider use of the uniforms in other competitions, such as the 2017 Universiade as well as future Olympics.