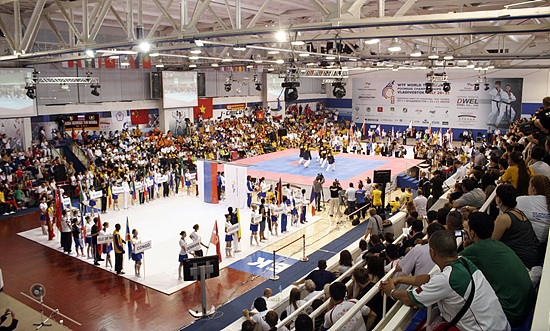 On the first day of the three-day annual event, which drew about 570 athletes from 53 countries, Korea grabbed four gold medals and one silver medal, while Great Britain and Germany won one gold medal each.

A total of 18 gold medals are up for grabs at the Vladivostok World Taekwondo Poomsae Championships.

Chinese Taipei took one gold and one silver, while host Russia, the Philippines and Denmark earned one silver each. Turkey took three bronze medals, while Iran won two bronze medals.

In the men’s individual junior division, Korea’s Yu-seok Kim won the gold medal, while the silver went to the Philippines’ Vidal Marvin Gabriel. The bronze medals were shared by Turkey’s Habip Okeu and Iran’s Mohammed Aderi.

In the men’s individual master 3 division, those aged 61 years and over, Great Britain’s Tongwan Shin won the gold medal, while Korea’s Kwang-il Park clinched the silver medal. The bronze went to the Netherlands’ Peter Wolfs and Colombia’s Oskar Posada.

In the 2nd pair division, those aged 36 years and over, Germany’s Michael Bussmann and Elvira Fuhrmann teamed up to grab the gold medal, while the silver went to Chinese Taipei’s Chung-Tsung Lu and Han-Sen Chang. Spain’s Vazquez Alberto Francisco Delgado and Alcaniz Yolanda Ubero won the bronze medal together with Turkey’s Zeynel Celik and Nesime Altun. 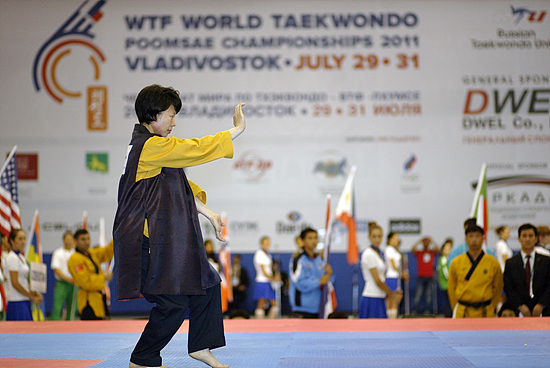 In the afternoon, there was an opening ceremony of the Vladivostok World Taekwondo Poomsae Championships.

The opening ceremony featured various Russian modern and traditional dances and a Russian taekwondo demonstration by young taekwondo practitioners. There was a taekwondo display by the WTF Taekwondo Demonstration Team, drawing big applauses from the spectators. 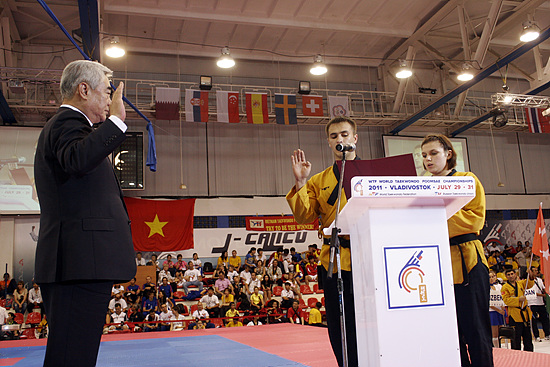 “The sport of taekwondo is ever changing. It has reached across the world, welcoming every person no matter their age, gender, race, religion, or physical ability,” said WTF President Choue at the opening ceremony. “It offers hope and determination, a sense of discipline and morality, and a strong foundation for a healthy way of life. But as our family grows larger, we must adopt and grow.”

Dr. Choue continued to say, “This year, there is a new look to this poomsae competition. As you see, new competition uniforms have been implemented to bring a sense of authenticity poomsae events.” “But the changes won’t stop there. Next year, free-style poomsae will be introduced. Athletes will be afforded the ability to adapt the old forms of poomsae into new, dynamic and artistic forms of taekwondo.”

As a special program prior to the opening ceremony, there was a five-member quarterfinal team match between China and Azerbaijan, in which Azerbaijan beat China 24-45. The action-packed team match drew big applauses from the jam-packed spectators.

Shortly after the opening ceremony, there was a five-member semifinal team match between Azerbaijan and host Russia. In the first half, which lasted five minutes, Azerbijan led Russia 12-8. In the second five-minute half, Russia came from behind to outpoint Azerbaijan 33-32. 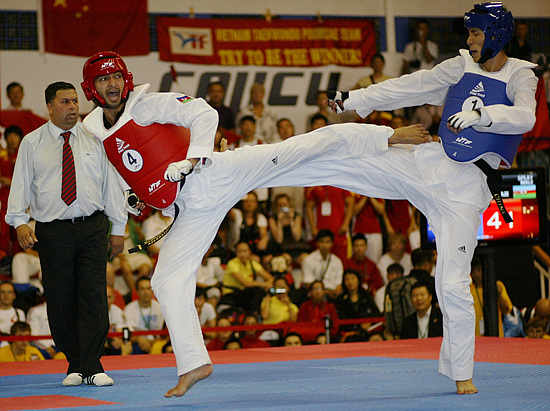 Another highlight of the opening ceremony was a free-style poomsae friendship competition involving teams from the Philippines, Turkey and Vietnam. Free-style poomsae is the performance based on taekwondo techniques with composition of music and choreography. At the friendship competition, Vietnam won the gold medal with 7.58 points, while Turkey took the silver medal with 7.50 points. The bronze medal went to the Philippines with 7.38 points. 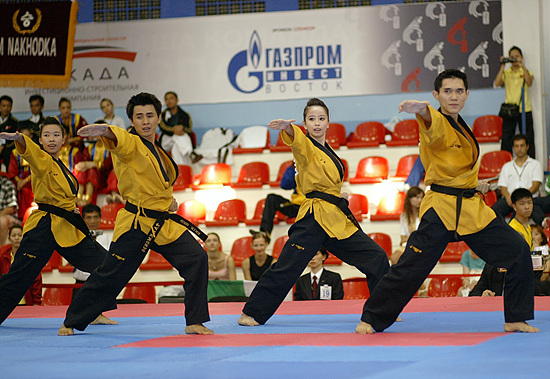