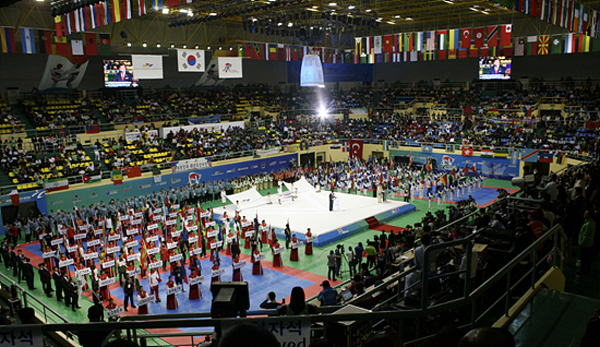 The biennial championships drew 1,037 athletes and 719 officials from a record 149 countries on an entry basis. A total of 80 international referees officiate at the championships.

The opening day featured competitions of two weight categories: the women’s -49kg and the men’s -58kg. The first day of competition decided on quarterfinalists. The semifinal and final matches of the two weight divisions will take place in the afternoon on the following day.

At 5 p.m., there was an opening ceremony of the championships at the Gyeongju Indoor Gymnasium. The ceremony drew Korean Culture, Sports and Tourism Minister Byoung Gug Choung, Jun-pyo Hong, president of the Korean Taekwondo Association; Gwan-yong Gim, governor of North Gyeongsang Province; and Yang-sik Choi, mayor of Gyeongju.

“The 2011 WTF World Taekwondo Championships have attracted a record number of countries. The WTF family grew to an astounding 197 member nations,” said WTF President Chungwon Choue in his opening remarks at the opening ceremony.

Dr. Choue said, “As we continue to grow, it could not be a better time to reach out to our brothers and sisters around the world to better serve humanity … to serve each other.”

“This year’s theme World Peace through Taekwondo aims to stretch out our hands to offer help and hope to those in need around the world in orphanages and refugee camps,” he said. “The beginnings of these efforts can already be seen in Thailand and Guatemala, where the national taekwondo governing bodies have worked to bring the spirit of taekwondo and Olympism to youth in orphanages. It is my hope that more work like this can be done in other countries.”

At the end of the opening ceremony, a five-member team competition between Korea and Russia was held to show the world the dynamics of taekwondo competition.

The special event, which lasted 11 minutes, including a five-minute first half and another five-minute second half, with a one-minute break, drew special attention from both spectators and the international media.

The weight categories of the male athletes were -68kg and -74kg. No electronic protectors were used.

In the first half, a contestant competed with his counterpart for one minute in accordance with the submitted fight list. Each team submitted their fight list 10 minutes before the start of the competition.

In the second half, athletes were freely replaced at any time without limit after an athlete carried out at least two exchanges of techniques. Russia won the friendly team match 18-16.

One thought on “World Taekwondo Championships Open in Gyeongju, Korea”