It marked the first time that Korea failed to retain the men’s overall title in the history of the biennial World Taekwondo Championships.

The Gyeongju World Championships featured the protector and scoring system (PSS) and an instant video replay system, helping make the biennial event the most transparent and fairest competition ever.

The event drew athletes and officials from a record 149 countries on the entry basis. All the semifinal and final matches were broadcast live by Korea’s KBS TV and a dozen major TV stations around the world.

The Good Fighting Spirit Awards went to Greece and Gabon, while the Active Participation Prizes went to Kazakhstan and Puerto Rico.

On the final day of the World Taekwondo Championships on May 6, 2011, France and Korea won two gold medals each, while Iran grabbed one gold. 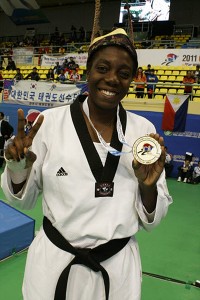 In the women’s -73kg weight category, France’s Gwladys Epangue, the gold medalist at the 2009 World Taekwondo Championships, earned her country the first gold medal at the Gyeongju Championships as she beat Korea’s Hye Ri Oh with a superiority victory.

The bronze medal in the women’s division went to Russian Baryshnikova and Serbia’s Milica Mandic. 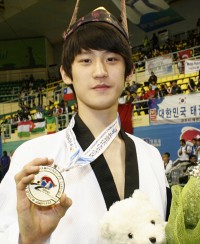 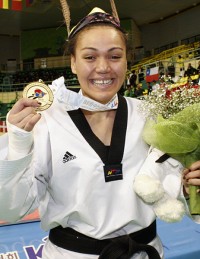 In the women’s +73kg weight division, France’s Anne Caroline Graffe, the silver medal winner at the 2010 European Taekwondo Championships, brushed aside a stiff challenge from Korea’s Sae Bom An in the final match to grab the gold medal. Graffe won the final match 1-0.

The bronze went to Spain’s Rosana Simon and Russia’s Olga Ivanova in the women’s category.

In the men’s +87kg weight category, Korea’s Chol Ho Jo defeated Uzbekistan’s Akmal Irgashev, the bronze medalist at the 2010 Asian Games, 4-0 to earn his country the second gold medal in the men’s division.