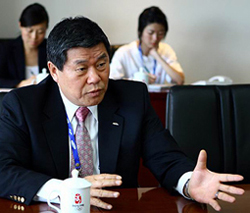 Based on intensive analysis and research, including observation of LaJust at the 2011 WTF World Taekwondo Championships Gyeongju, Swiss Timing has informed the WTF that it has selected Daedo as a PSS supplier for London 2012 Olympic Games taekwondo competition.

I thank you in advance for your continued support and collaboration for our continued endeavors to best stage competitions of our beloved sport in the Olympic Games.