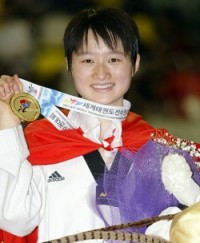 China’s Wu Jingyu, the gold medal winner both at the 2008 Beijing Olympic Games, brushed aside a stiff challenge from Chinese Taipei’s Yang Shu Chun, the bronze medalist at the 2010 Asian Taekwondo Championships, to clinch the gold medal in the women’s -49kg weight category. Wu won the final match 6-2.

Chinese Taipei’s Yang, who reached the final match with a 10-1 victory over Morocco’s Atabrour, told journalists shortly after the match, “I am satisfied with the results as I have trained just for one month. If I have the chance to compete at the 2012 London Olympic Games, I will do my best for the best performance.”

For Yang, it was her first international championships appearance following her three-month suspension by the World Taekwondo Federation last December for wearing extra electronic sensors in her socks. At the press conference, Yang expressed her special thanks for the encouragement and support by the Korean people.

The bronze medal in the women’s division went to Spain’s Brigtte Yague and Morocco’s Sanaa Atabrour in the division.

The 2011 WTF World Taekwondo Championships kicked off on May 1 at the Gyeongju Indoor Gymnasium in Gyeongju, Korea for a six-day run. The championships drew about 1,700 athletes and officials from a record 149 countries.

For the first time ever at the WTF World Championships, all semifinal and final matches of each weight division take place between 2 p.m. and 4 p.m. on the following day. 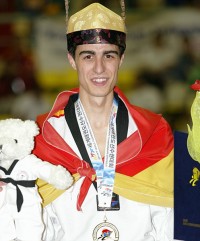 The Dominican Republic’s Yulis Gabriel Mercedes Reyes and Chinese Taipei’s Wei Chen Yang, the gold medalist at the 2010 Asian Games and the silver medal winner at the 2010 Asian Championships, shared the bronze medal in the men’s category.

Mercedes Reyes advanced to the final as he came from behind to beat his semifinal match opponent, Chinese Taipei’s Wei, 3-1.

All the semifinal and final matches were broadcast live, and the WTF showed all the matches live through its WTF Taekwondo WEB TV on the WTF Web site. The live Internet broadcasting time was GMT 5:15 – 6:45 on May 2, 2011.