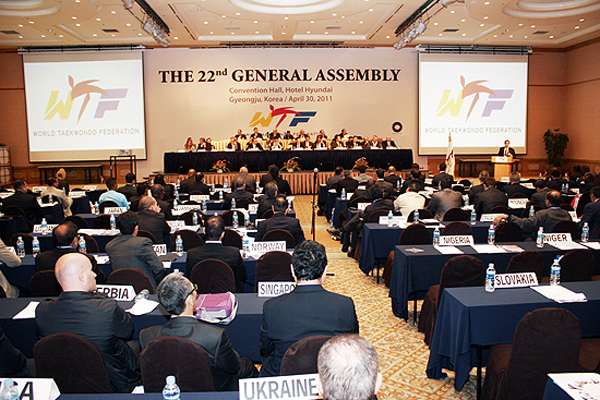 “This is such an exciting time for our sport. We are growing in numbers and reaching into areas that other sports have yet to explore,” said WTF President Chungwon Choue during the General Assembly. “Taekwondo is truly a sport that breaks barriers and opens the door for fairness and equality.”

The General Assembly also approved amendments to the WTF Statutes and the WTF Competition Rules.

Among major changes to the WTF Statutes are the increase in the number of WTF committees from the previous 12 to 13 and the names of the committees.

The General Assembly approved the addition of the Poomsae Committee as a sub-committee of the WTF Technical and Development Committee, formerly the Technical Committee.

In line with the WTF’s 2011 slogan “World Peace through Taekwondo,” the participants also heard four special presentations on taekwondo programs for orphans and those with disabilities.

The presenters and their topics were Mr. Pimol Srivikorn, president of the Taekwondo Association of Thailand, on “Free Taekwondo Program for Orphans,” Mrs. Maria Borello Castillo, a WTF Council member from Guatemala, and General Sergio Arnoldo Camargo Muralles, president of the Guatemala Olympic Committee, on “Taekwondo for Youth with Special Needs and Taekwondo as an Obligatory High School Course,” Mr. Seung Kyung Lee, president of the American Taekwondo United, and another American master Sun-ki Chong on the “Health Kick” or “Board Breaking for Charity” program to raise funds for the women & children’s hospital in Buffalo, N.Y., and Canadian Master Michael Sirota, president of the Sirota’s Alchymy Martial Arts and Life Skills Center, on “Taekwondo for the Disabled.”

“There is so much that is ahead of us and there are a lot of people depending on our efforts. The hopes and dreams of so many hang in the balance of the work that we are commissioned to do,” said WTF President Choue in his closing remarks during the opening ceremony. “This and only this must be the reason for the roles we serve. Any other reason cheats our taekwondo family of all they aspire to be.”