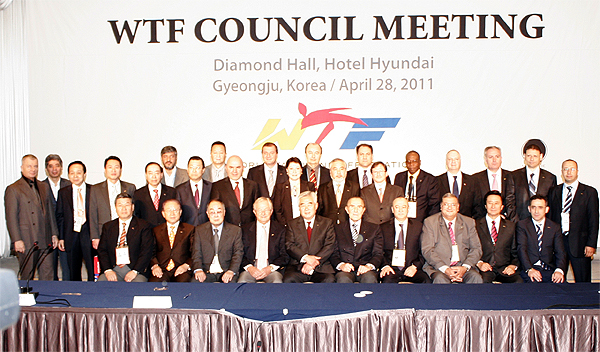 Among major changes to the WTF Statutes are the increase in the number of WTF committees from the previous 12 to 13 and the committee name changes.

The Council approved the addition of the Poomsae Committee as a sub-committee of the WTF Technical and Development Committee, formerly the Technical Committee.

Under the amended WTF Poomsae Competition Rules, the age limits for athletes in each division is based on the year, not on the date, when the championships are held.

A free style poomsae competition was newly included, with detailed scoring criteria and method of scoring. Free style poomsae is the performance based on taekwondo techniques with composition of music and choreography.

After lunch, the WTF Council members had a brainstorming session for two and a half hours with various topics, including “World Peace through Taekwondo,”“Expansion of the Taekwondo Peace Corps,”“Taekwondo as an Olympic Sport,”“Dynamic Taekwondo,”“Greater Media Exposure,” and “Task of WTF Training Centers.”