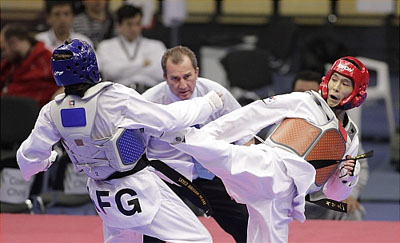 After a thorough investigation, the WTF concluded that the error was caused in the course of upgrading software of LaJust PSS at the beginning of this year to adopt new Competition Rules of the WTF which was passed at the WTF General Assembly in October last year. LaJust has already distributed corrected version of the upgraded software to all buyers.

The WTF held urgent and intensive meetings with LaJust and organized a test with the corrected version of the software on April 5 to monitor if correction was made appropriately. The new version worked properly giving confidence for the use at the 2011 WTF World Taekwondo Championships.

The WTF is planning another test on April 22 in Gyeongju Gymnasium to check proper functioning of the LaJust system in the operational aspects. In addition, the WTF has established a contingency plan in case of malfunction of PSS during the championships in Gyeongju. LaJust PSS will be switched to non-electronic scoring mode if that happens. This switch will also be finally checked at the test on April 22.

Although the cause of the problem was found as a bug created during the upgrading process and not much significant and easily repairable, the consequences of the error were undoubtedly enormous. Therefore, the WTF has formed an evaluation group to screen the performance of LaJust PSS at the 2011 WTF World Taekwondo Championships.

The possibility of the use of LaJust PSS at the 2012 London Olympic Games will be subject to final evaluation of the group to be headed by Mr. Ivan Dibos, an IOC member of Peru. He also serves as a WTF vice president and chairman of the ad-hoc WTF committee on PSS.