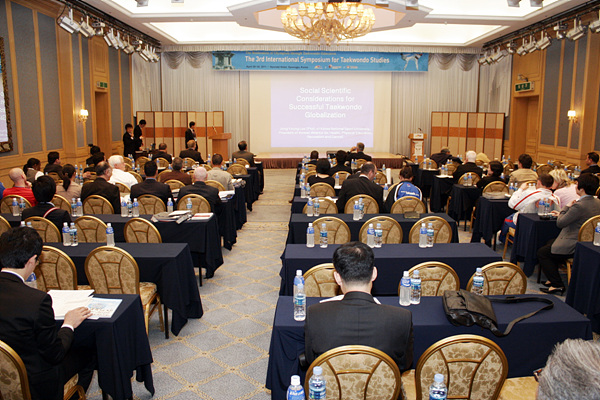 Under the theme “Realization of Olympism through Taekwondo Education,” the two-day symposium drew about 300 academics and dignitaries from at home and abroad.

A total of 46 papers from 13 countries, including Iran, Bolivia, Croatia, Greece, the United States, and Great Britain, will be presented for the participants in the symposium.

The first international taekwondo symposium was held in 2007 on the occasion of the 2007 World Taekwondo Championships in Beijing, China, with the second one held in Copenhagen, Denmark in 2009.

During the opening ceremony, Mr. Phillip Walter Coles, a member of the International Olympic Committee from Australia and a vice president of the WTF, delivered an opening address on behalf of WTF President Chungwon Choue.

“The main theme of this symposium well reflects the growing popularity of taekwondo worldwide as a global sport for all that transcends nationality, gender, physical disability and age,” Mr. Coles said.

“The development of taekwondo in this academic field should also involve global initiatives of exchanging ideas and academic discussions to accommodate the characteristics of taekwondo disciplines in different parts of the world,” he said. “This international symposium, therefore, opens a unique opportunity for international scholars in the field of taekwondo studies to share the ideas on taekwondo academic programs and curriculum as well as discuss findings of outstanding studies in the field.”

Grandmaster Won-sik Kang, president of the Kukkiwon, make a congratulatory speech during the opening ceremony.

Two keynote speeches were made during the opening ceremony. Under the topic “The Exercise Pressor Reflex: What is it? Why is it important?”Dr. Charles Stebbins of the United States made the first keynote speech, while Dr. Jong Young Lee of Korea delivered a second keynote speech under the title “Social Scientific Considerations for Successful Taekwondo Globalization.”

As a special event of the opening ceremony, Mr. Koptev Vladimir, a Russian para-taekwondo practitioner, made a special taekwondo demonstration for about 10 minutes, drawing a big applause from the participants.