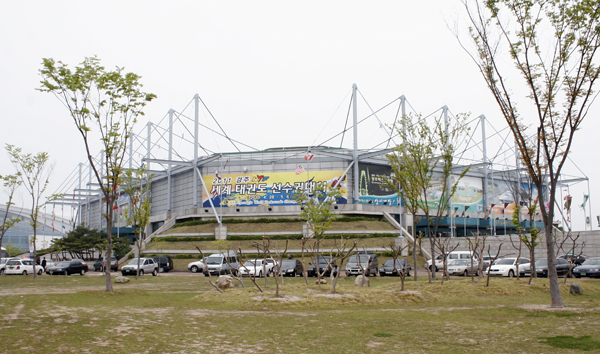 The biennial championships, which will take place at the Gyeongju Indoor Gymnasium, are expected to draw about 1,700 athletes and officials from a record 149 countries.

A total of 149 countries involving 1,040 athletes and 715 officials submitted their entry forms to the WTF. New Caledonia, which became a full member of the WTF in 2010, sends for the first time one male athlete and two officials for the Gyeongju championships.

It marks the sixth time that the championships will be held in Korea, where taekwondo was originated, with the latest championships held in Jeju in 2001.

Reflecting the importance of the championships, Korea’s KBS TV, the host broadcaster of the event, will broadcast live all the semifinal and final matches. Such broadcasters as PC TV Mexico, Globosat Brazil, ESPN 360 USA, CCTVB China, RAI Italy and NTV Russia will also broadcast live the competitions.

The Championships, which will feature 8 male and 8 female weight categories, will use a protector and scoring system (PSS), formerly known as electronic body protectors, and an instant video replay system, for fairer judging.

For the first time in the World Championships, an athlete will earn four points if he or she delivers an effective turning kick to the opponent’s head. A 12-point gap victory system will apply to the upcoming championships.

Twenty-five percent of the registered athletes per weight division will be seeded based on the WTF World Ranking as of April 1, 2011.

Under the theme “The Realization of Olympism through Taekwondo Education,” the championships will also feature a two-day International Symposium for Taekwondo Studies on April 29-30. The third edition of the international symposium is expected to draw about 200 academics and dignitaries from about 20 countries.

On the occasion of the Gyeongju Championships, the WTF will hold a WTF Photo Contest, the fifth of its kind, and the first International Children’s Art Contest under the same theme “World Peace through Taekwondo.”

During the opening ceremony of the championships on May 1, a five-member team competition between Korea and Russia with a new competition format will be held as a special event to show the world the action-packed taekwondo.

The contest time will be a five-minute first half and another five-minute second half with a one-minute break. The weight divisions of the athletes are the men’s -68kg and -74kg weight categories. In the first half, a contest shall compete with his counterpart for one minute in accordance with the submitted fight list. In the second half, athletes may be freely replaced at any time without limit after an athlete carry out at least two exchanges of techniques.

On April 30, the WTF General Assembly will take place at 2 p.m. at the Hyundai Hotel in Gyeongju, in which the participants are likely to approve five countries as new members of the WTF. The five are Cook Islands, Rwanda, Tuvalu, Guadalupe and Martinique. The approval would increase the WTF global membership to 197, the ninth largest International Sport Federation.

In line with the WTF’s 2011 slogan “World Peace through Taekwondo,” the participants in the General Assembly will hear four special presentations on taekwondo programs for orphans and those with disabilities. The presenters will be from Thailand, Guatemala, the United States and Canada.