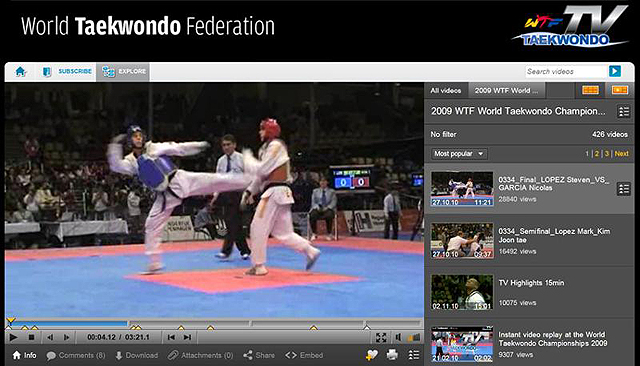 The WTF Taekwondo Web TV (www.wtf-taekwondo.tv) was launched in 2008 as an ambitious initiative by the World Taekwondo Federation (WTF) to take advantage of the latest new media technology in order to reach out to the worldwide taekwondo fans and realize the potential of this fast growing global sport.

For the first one and a half years since the project kicked off, continued efforts have been exerted to show the taekwondo new media known to the taekwondo and international sport community.

It was at the 2009 WTF World Taekwondo Championships in Copenhagen, Denmark that catalyzed the momentum for the WTF Web TV and put it on the map. The five days of competition attracted 300,000 visitors and recorded one million video streamings and two million page impressions. Since then, the trend has only been upwards.

The concept underlying this initiative is simple and clear – meeting the needs of different groups of stakeholders in the taekwondo community. When a competition is held, every single match falls on the focus of interest and attention of various groups of people: family and friends of athletes, people in the city or the country of medal winners and so on.

However, as in many other sports, traditional TV cannot cover all the matches of a tournament or all the tournaments of taekwondo, because TV is selective in choosing the competitions for coverage. It also tends to air only high-interest matches of a competition that it covers, for example, semifinals or finals. The WTF Taekwondo Web TV aims to serve the niche market by ensuring everyone has an easy and free access to all matches of as many taekwondo competitions as possible.

To this aim, the WTF developed WTF-Taekwondo Web TV in cooperation with Dartfish, a Swiss company leading in development of video solutions for the sport world and designed a unique system integrating the instant video replay system with Web TV. This solution allows producing videos in a cost effective way and using the videos generated by the instant video replay system to post them on the web.

In addition, as the system is compatible with all WTF-recognized Protector and Scoring System (PSS), it is easy to operate and enables automotive video production.

The WTF Taekwondo Web TV posts videos produced through this solution to the web and makes them open to the public free of charge. For viewer interface, keyword search function was added to allow viewers to easily find the videos that they want to watch. To make video-watching a more fun experience to viewers, a comment addition function was implemented.

In addition, it also offers free “easy video embedding” services to all the members of taekwondo family including athletes, clubs, and WTF member national associations. Anyone can select and embed videos that they want show and share with others on any website.

On top of these very useful functions, the web TV serves to distribute videos for coaching purposes. People can download videos and archive them on personal computers for review and analysis. This feature was developed to realize WTF’s commitment to offering an equal opportunity for every athlete to learn and improve their performance, thus helping contribute to further development of the sport. The WTF-Taekwondo Web TV also offers educational materials for coaches and referees.

As a next step, the WTF sets an objective to evolve the WTF Taekwondo Web TV as a platform for revenue generation through advertising for the sake of the entire taekwondo community.

For this purpose, a series of plans will be implemented in various aspects. First, a greater number of video content will be produced and made available. In particular, 2011 is expected to be a jam-packed year with many important events, including the WTF World Taekwondo Championships in Gyeongju, Korea and world and continental qualification tournaments for the 2012 London Olympic Games.

In addition, there are major international taekwondo open competitions to be added. Furthermore, video content will be also more diversified to cover competition and non-competition aspects. It will also provide a value-added service for the members of the WTF Global Athlete License and Global Membership System.

Its track record speaks for itself. Considering this growth trend and the above objectives that are planned, it will become one of the fastest growing new media in sports, presenting great potential for revenue generation.