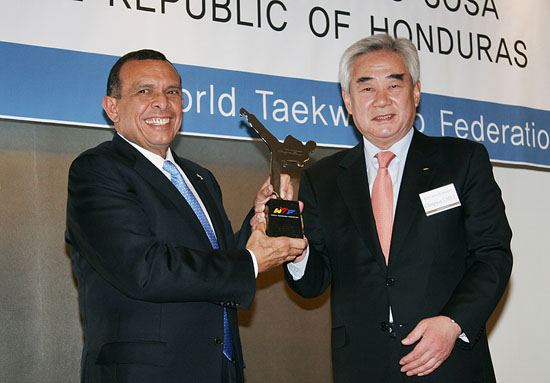 At the welcoming dinner, Honduran President Lobo, a 3rd Dan Kukkiwon black-belt holder, showed his “special” love for taekwondo even by showing off his Dan certificate to the participants.

Honduran President, 64, Lobo arrived in Seoul on Feb. 20 for a three-day state visit at the invitation of Korean President Lee Myung-bak.

“I started practicing taekwondo in 1986 under Korean Grandmaster Song Bong-kyung,” Honduran President Lobo said in his speech at the dinner, which drew about 100 dignitaries from Korea and Honduras.

Grandmaster Song, who is known as the father of taekwondo in Honduras and passed away in 2008, went to Honduras in 1975 to teach taekwondo for the military and police officials.

“I have learned discipline, courage and perseverance through the teachings of Grandmaster Song and that is why I have a special love for taekwondo and I owe too much to taekwondo,” he said.

The Honduran President said, “I am asking our Honduran youngsters to practice taekwondo as it gives taekwondo practitioners peace of mind, among others.”

The President also said that he practiced taekwondo together with the Honduran Ambassador to Korea, Michel Idiaquez Baradat, under Grandmaster Song. The ambassador married the daughter of Grandmaster Song, Evette Song Kang, in 2002.

With an overall population of about 8 million, Honduras has some 10,000 taekwondo practitioners and taekwondo is the most practiced martial art-turned sport. 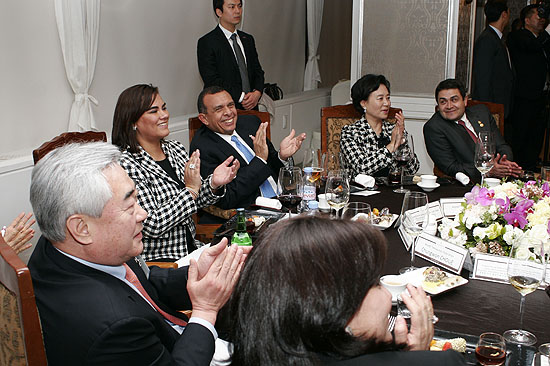 In his welcoming speech, WTF President Choue spoke well of the Honduran President.

“It is a great privilege for the WTF to be hosting you this evening. Our shared love for the art and sport of taekwondo has established an already unique relationship,” WTF President Choue said. “Tonight, it is my wish that this relationship will grow further.”

“As the leader of a nation, there are undoubtedly great challenges faced on the daily basis,” Choue said. “I’m certain that the training that you received from Grandmaster Song Bong-kyung has benefited you to meet those challenges head-on with courage and perseverance.”

WTF President Choue continued to say, “It is clear that Honduras is now in good hands under your leadership. Truly, if any country is to succeed, they need a taekwondo person to lead the way. Your decision to send an ambassador to Korea that is also a taekwondo man was pure genius.”

“Tonight, I wish to express my deepest appreciation for your dedication and determination not only as your nation’s leader, but a member of our taekwondo family,” Choue said. “Your Excellency, you are a true testament to how taekwondo can enrich the lives of its practitioners. You are a model for what can be achieved through the life lessons that taekwondo can provide.”

“The growing population of taekwondo in Honduras and the rest of the world is solidifying its position as an Olympic sport,” WTF President Choue said.

After the speeches, WTF President Choue delivered a taekwondo statute as a gift to Honduran President Lobo and vice versa.

Honduran President Lobo is scheduled to receive an honorary 9th WTF Dan certificate from WTF President Choue and a taekwondo uniform from Korean President Lee Myung-bak in a ceremony shortly after a luncheon at Cheong Wa Dae on Feb. 21.